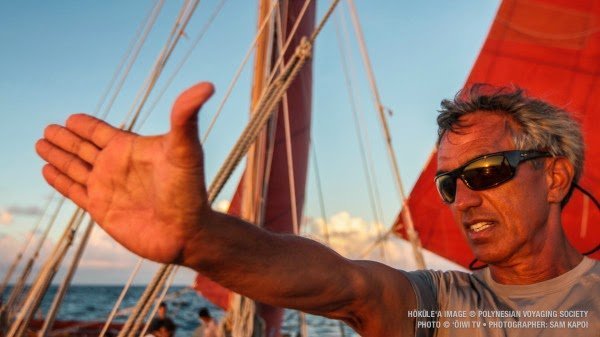 “The great navigators on Earth are those who give kindness and compassion to the Earth and those who live on it,” said Nainoa Thompson.

Those who know the world’s oceans understand that there are few who are so understanding of ocean navigation and the ocean environment than Thompson, a master navigator who has traveled more than 16,000 miles (25,750 km) between islands in the Pacific Ocean without instruments.

But we consider Thompson a genius with the highest possible navigational IQ and he is doing his best to keep the ancient traditions and knowledge alive. He was recently recognized for Excellence in Exploration at the 2015 Peter Benchley Ocean Awards.

Thompson explains the Hawaiian voyaging traditions that rely on nature and memorization (see here). Navigators like Thompson and his mentor Mau Piailug relay on information such as the color, temperature, and salinity of seawater, floating plant debris, sightings of land-based seabirds flying out to fish, cloud type, color, and movement, wind direction, speed, and temperature, the direction and nature of ocean swells and waves, the position of stars in the sky. Incredibly enough, the “compass” they use are not magnetic, but rather a mental model of where islands are located and the star points which one could use to navigate between them – an extremely complex and difficult task that takes years to learn and memorize.

The star compass also reads the flight path of birds and the direction of waves. It does everything. It is a mental construct to help you memorize what you need to know to navigate.

The memorization process is very difficult. Consider that you have to remember those three things for a month – every time you change course, every time you slow down. This mental construct of the star compass with its Hawaiian names is from [Micronesian master navigator] Mau [Piailug]. The genius of this construct is that it compacts a lot information and enables you to make decisions based on that information.

How do we tell direction? We use the best clues that we have. We use the sun when it is low down on the horizon. Mau has names for the different widths and the different colors of the sun’s path on the water. When the sun is low, the path is narrow, and as the sun rises the path gets wider and wider. When the sun gets too high you cannot tell where it has risen. You have to use other clues.

Sunrise is the most important part of the day. At sunrise you start to look at the shape of the ocean-the character of the sea. You memorize where the wind is coming from. The wind generates the waves. You analyze the character of the waves. When the sun gets too high, you steer by the waves. And then at sunset you repeat the process. The sun goes down-you look at the shape of the waves. Did the wind direction change? Did the swell pattern change? At night we use the stars. We use about 220, memorizing where they come up, where they go down.

When it gets cloudy and you can’t use the sun or the stars all you can do is rely on the ocean waves. That’s why Mau told me once, “If you can read the ocean, you will never be lost.” One of the problems is that when the sky gets black at night under heavy clouds you cannot see the waves. You cannot even see the bow of the canoe. This is where traditional navigators like Mau are so skilled. Lying inside the hull of the canoe, he can feel the different wave patterns as they come to the canoe, and from them tell the canoe’s direction

Image being an open water swimmer, especially a channel swimmer, and having the same level of understanding of the oceans as Thompson. When Thompson describes finding atolls that are hundreds or thousands of kilometers away, he takes in a lot of clues. He explains, “The wave patterns change when an island is near. The behavior of animals in the sea, such as dolphins, will change. .”