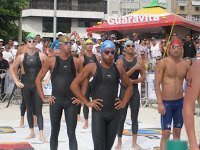 It decision is being anxiously anticipated by thousands of open water swimmers from coast to coast.

The US Masters Swimming Long Distance Swimming Committee is currently debating the issue and there are strong emotions running on both sides, behind closed doors and across pool decks and shorelines from coast to coast.

US Masters Swimming Executive Director Rob Butcher explained one perspective on why technical swimsuits should be allowed in an interview on Swimming World TV on January 25th.

But his viewpoint has open water swimming traditionalists climbing the walls. The purists – those who love the sport for its inherent man vs. the elements challenge – are scratching their heads in shock. Renowned marathon swimmer Marcia Cleveland colorfully remarked, “Chewing aluminum foil is slightly more pleasant for me that to listening to anyone attempt to rationalize this argument [about wearing technical swimsuits].”

“Those of us who are serious about open water swimming do not even consider wetsuits to be part of the competition. By allowing the cheater suits, US Masters Swimming may be widening the amount of participants, but with that comes more safety issues. [In my previous position as a key committee chairperson], I am glad that I upheld the level of integrity that masters open water swimmers deserve.”

But, the marketplace and successful entrepreneurs seem to be ahead of the game and anticipating changes. John Mix, founder and president of FINIS, recently announced that his company is dropping the prices of technical suits allowed in short-course yards meets to US$20. That commercial decisions gives a hint that technical swimsuits may be on their way out in the open water, too. 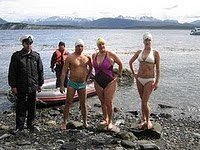 We certainly have to give Rachel kudos and credit for courage and style.