Masters Of The Open Water Universe 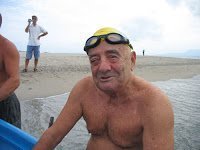 Masters aquatic athletes from all over the globe are slated to begin competition at the 13th FINA World Masters Championships in Sweden tomorrow.

The Championships will conclude with a highly popular 3K open water swim on August 7th in Lake Delsjön in Göteborg, Sweden.

The water is so clean in Lake Delsjön, which serves as the main fresh water reservoir for the city of Göteborg, that the organizers state, “There is no need for a shower after the race.”

6,600 masters athletes from 74 countries will enter, with the majority of the athletes (5,000) participating in the pool swimming events and 977 athletes entered in the open water race.