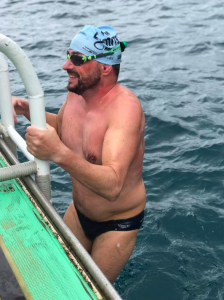 Matthias Kaßner completed a crossing of the Tsugaru Channel from Honshu to Hokkaido in northern Japan in 9 hours 45 minutes yesterday.

It was his fifth Oceans Seven channel in a prolific marathon swimming and ice swimming career.

He has the Cook Strait in New Zealand and the Molokai Channel in Hawaii left on his agenda after completing the English Channel, North Channel, Strait of Gibraltar, Catalina Channel and Tsugaru Channel as well as a number of other marathon swims from Europe (including the Beltquerung and Bodenseequerung) to America (Manhattan Island Marathon Swim). 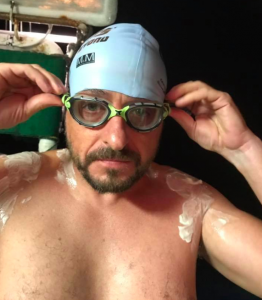 Kaßner said, “What a night, what a day, what a swim. I started at midnight from Honshu and finished on forenoon at Hokkaido. It was tough open water swimming. I had a bit of everything: quiet water, rough water, sun, rain, a lot of marine life including swarms of tuna, yellowfish that I have never seen before – and don’t want to see again – and a shark directly after I was on the boat. The conditions were better than I had expected. Most importantly, I had the current on my side.

It pushed me in the beginning, in the middle of the strait where I had to swim really hard to stay in a good current. In the end Mother Nature let me pass. This swim was quite special for me after last year’s DNF.”

One of his supporters, Oliver Halder, is celebrating his successful crossing with some unique T-shirts with a Japanese theme.