Maureen Montgomery’s Got It. The Triple Crown Q&A 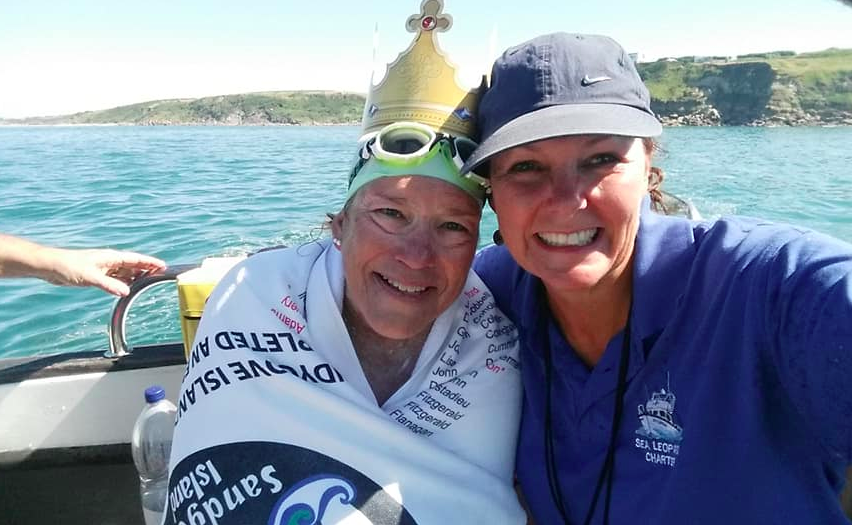 She talked about her achievement:

Daily News of Open Water Swimming: When and where did you start to swim?

Maureen Mech Montgomery: I was always inspired by my dad who told a story of how he thought he was in a lifeguarding class and he actually was in swim team tryouts and made the team. I knew deep down I was meant to swim. I started swimming, with zero instruction on my high school swim team. Coach Steeves was very patient and helped guide me through four years of swimming. I would swim whatever he put me in, but I loved the 500-yard distance swim. I earned a letter in high school, but was not good enough to make it on any college team.

Daily News of Open Water Swimming: What was your first adventure in the open water?

Maureen Mech Montgomery: I loved swimming in open water all along. My first time was a lake in Mio, Michigan at my uncle and aunt’s cabin when I was in high school. My cousins would accompany me in a canoe. Over the years I participated in triathlon races (Sprint, Olympic, and Half Ironman) in Florida and New Hampshire, the swim was always my favorite part…but running not so much.

My first long distance swim was an 8-mile crossing from Clearwater to Tampa, Florida. I got the bug. I met a great group of swimmers who encouraged and inspired. I continued on and did the Tampa Bay Marathon Swim and loved it.

A few years ago, my good friend, Mark “Magoo” Smitherman texted me after a cold water swim we finished on Clearwater Beach, Florida. In the text he said, “Mo, I think the English Channel is in ur future.” I couldn’t believe it. He continued, “and this ain’t my first rodeo. I know when I’ve got a potential channel swimmer…” Magoo also texted that I, “rise to the occasion without fail.” I honestly could not believe it and never forgot that text and set my sights on the future.


Daily News of Open Water Swimming: What attracts you to channel crossings and marathon swims?

Maureen Mech Montgomery: First, for sure the awesome people that you meet. I have met people from all over the world and it is so nice to listen and talk to them. Second, the water is my happy place. I love the feel, the peace, the tranquility. I also love the challenge, the change, and the uncertainty. You just never know what nature is gonna throw at you.

Daily News of Open Water Swimming: Who did you have on your escort boats for the English Channel, Catalina Channel and 20 Bridges?

In the Catalina Channel, three of my friends from high school crewed for me: Greg and Steve kayaked and Matt was in charge of music during my feeds. He came up with an awesome playlist, along with Liz Fry’s sister who volunteered to be there. Peggy also crewed for me at SCAR in 2018.

During the 20 Bridges Manhattan Island Swim, my sister Missy and my best friend Maribeth crewed for me.

Each crew on each swim did an awesome job. I am easy to please and they knew ways to make me laugh and keep my spirits high.


Daily News of Open Water Swimming: Did you eat the same foods and consume the same drinks on all three Triple Crown swims?

Maureen Mech Montgomery: Pretty much. Carbo Pro Mix with green/matcha tea or Gatorade, GU’s, and Stinger waffles were my typical go-to’s. However, Peggy introduced Oreo cookies into my Catalina line-up, loved it. Donna introduced canned peaches at the English Channel, what a treat.

Daily News of Open Water Swimming: What was the lowest point of each swim, mentally and/or physically?

Maureen Mech Montgomery: What a great question. Honestly, I get so into being in the moment that I really don’t get low mentally. I do get tired physically, my arms and shoulders hurt a bit, but otherwise I don’t dwell on it because I am so focused on successfully completing the swim that I don’t go to a negative place. I have been very fortunate in that I have had some great conditions for each of the swims.

Daily News of Open Water Swimming: How did you get out of those depths and finish?

Maureen Mech Montgomery: I typically think of happy moments, places, and memories. Music also gets me through as I love music. I had an English Channel playlist…I asked people to give me a song that would either remind me of them or motivate me, my friends and family gave me some awesome songs. My sister made a completely different super top secret playlist of songs from the past that I could not listen to until I was in the channel…this kept me motivated mentally. Also when I swam the English Channel, my sister’s had a banner made that said, “Go Mo Go! English Channel Swim 2018” and they hung it on the side of the boat and I had a visual that kept me focused on my goal.

Daily News of Open Water Swimming: Where and how much did you train for each of your swims?

Maureen Mech Montgomery: I feel like I trained a lot. I swam Catalina in September 2017, so I trained prior to this all winter, spring and summer. Then I signed up for SCAR 2018 and continued training through fall, winter, and spring. I then participated in Cork Distance Week in 2018 and continued training for that and swam twice a day during Cork Distance Week for a total of about 52-54 miles that week. I came home and then tapered for the next 3 weeks leading up to the English Channel.

Daily News of Open Water Swimming: Did you ever have any doubts of your successes before the swims began?

Maureen Mech Montgomery: Without sounding flip or egotistical? Never a doubt. My husband and son would always comment, “You know you got this.” Other people said that, barring unforeseen circumstances, they had no doubts I would succeed. I was realistic though and was ready for anything that could happen.

Daily News of Open Water Swimming: What advice do you have of others, especially parents and working adults, when setting out to achieve certain goals in the open water?

Maureen Mech Montgomery: Be ready to spend the time to get to the finish line. It takes a lot of time from your family as you are swimming for hours after work and on weekends, make sure you have their support and approval to meet your goals, without that it is selfish to pursue something that will have such an impact on time, finances, etc.

Once you have this, you are golden and can do anything within your reach. Know that you will have times where you will be dog tired and feel that you cannot train another day. Get past this and carry on. This is where the mental toughness comes in and will help you during a long distance swim. Mantras come in handy, too.

Finally, enjoy and have fun. These swims are hard, but if you have the passion, they should also be fun. I know that there are people out there who take this super serious; however, I believe that you can focus and still have fun doing it. For me, if the fun ends, what’s the point in continuing on in pursuing the goal…