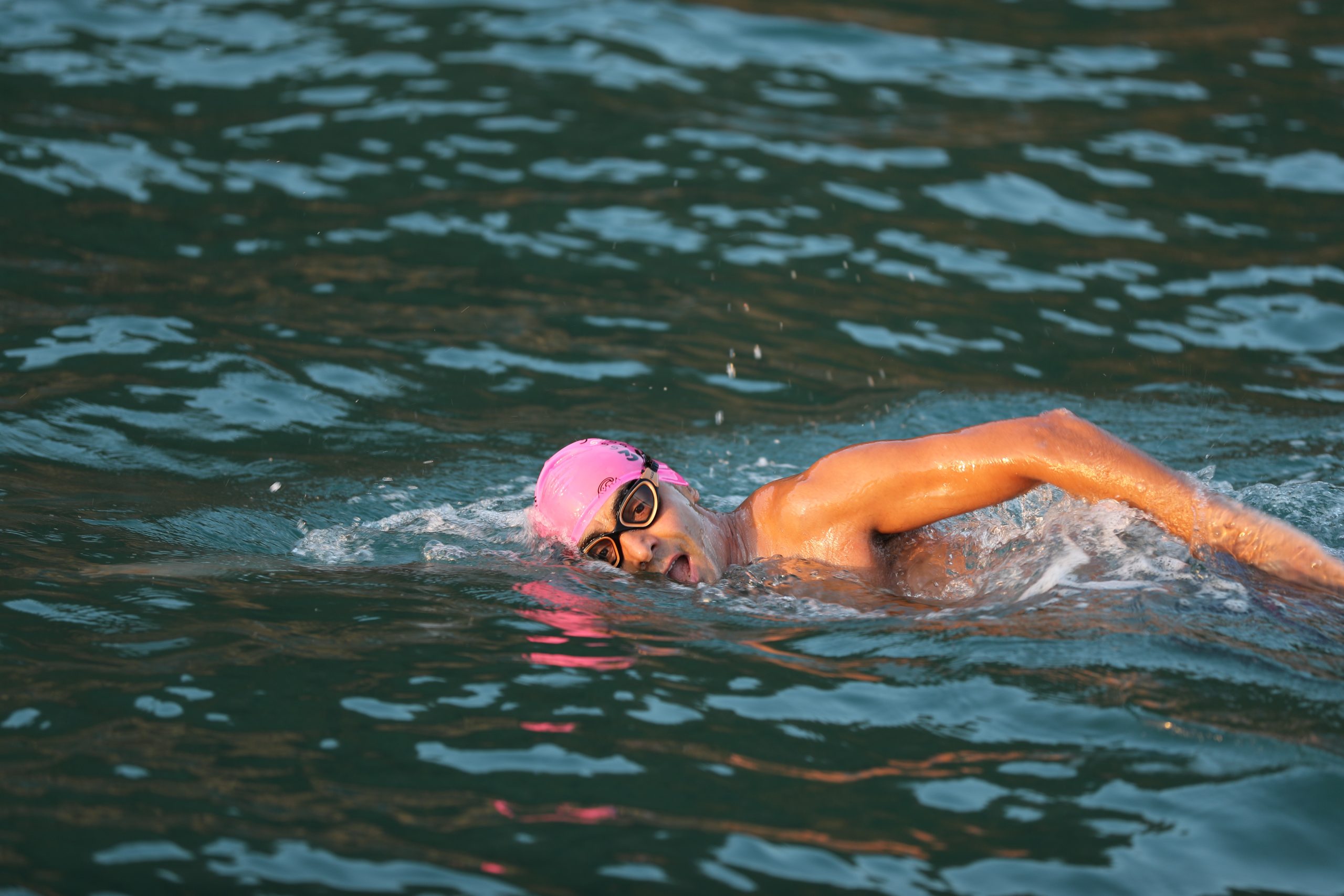 Mayank Vaid, a Hong Kong-based intellectual property lawyer, had to dig deep, very very deep over the weekend when he became the first person to complete the HK360Xtreme Challenge, the first triple-stage circumnavigation triathlon around Hong Kong Island. 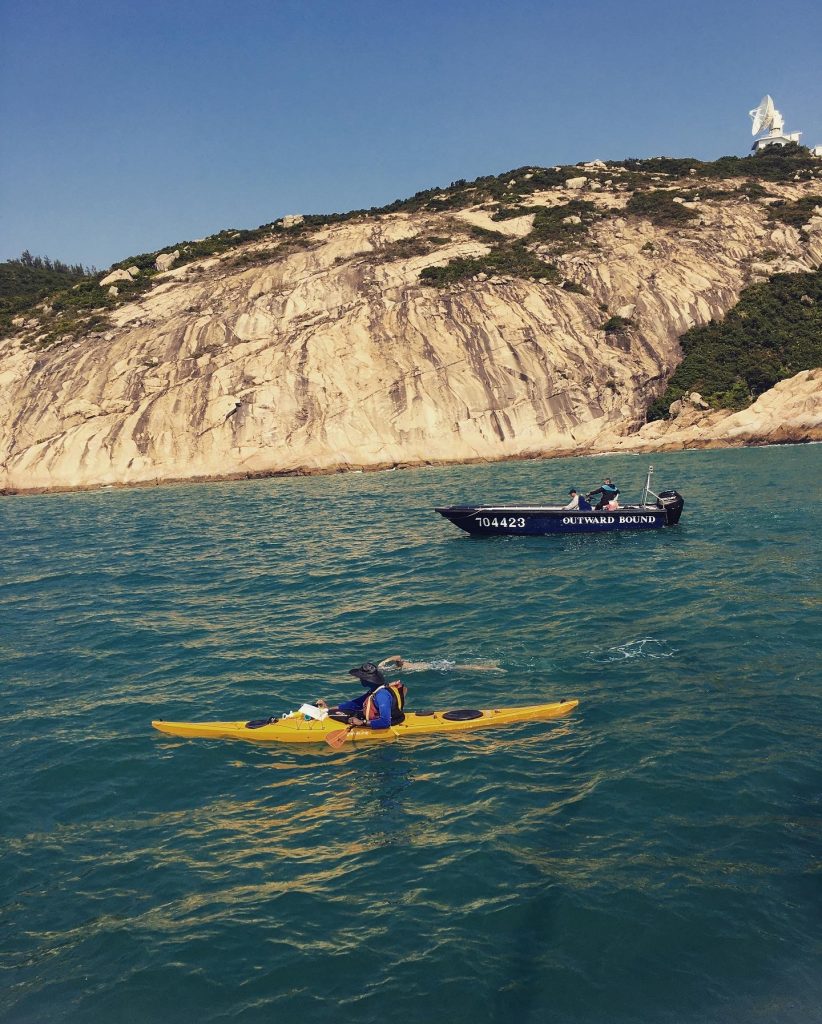 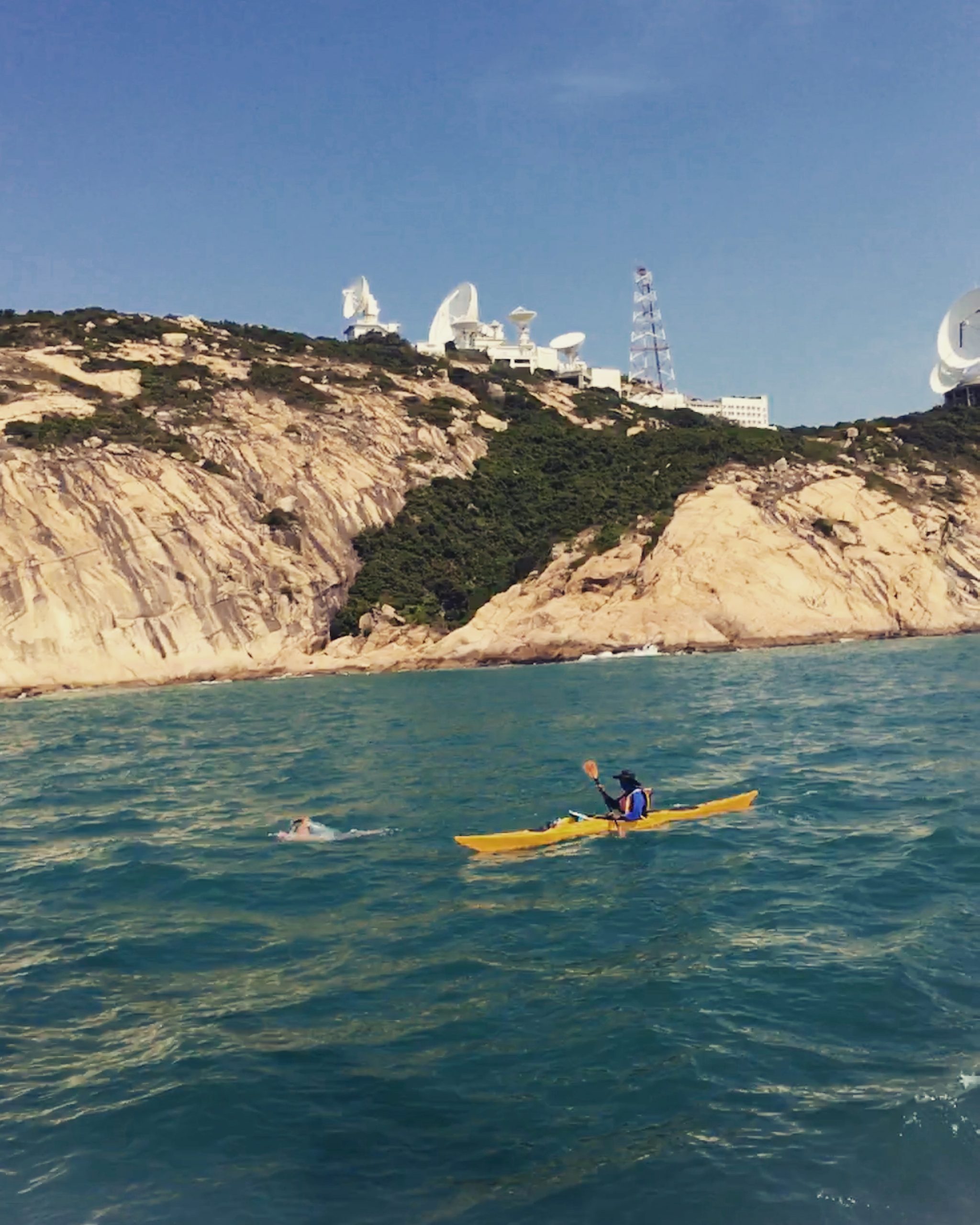 The HK360Xtreme Challenge is a three-stage triathlon that starts off with a 45 km swimming circumnavigation of Hong Kong Island, then follows up with a 215 km cycling circumnavigation of Hong Kong Island and New Territories, and then finishes up with 100 km running for a total distance of 360 km. Athletes can decided how they want to arrange their rest stops, sleeps and transitions.

On November 6th at 1:15 am, Vaid set off on his 45 km swim leg. 70 hours 19 minutes 53 seconds later near midnight of November 7th, he completed the inaugural HK360Xtreme Challenge.

Vaid became the fourth swimmer to complete the HK360Swim in 18 hours 8 minutes 22 seconds. Shu Pu explained the circumnavigation that she first conceived in 2016, “The vision for HK360Swim is to be recognizable worldwide as the signature swim challenge for Hong Kong, similar to the English Channel crossing between England and France and the 20 Bridges Swim in New York City.” 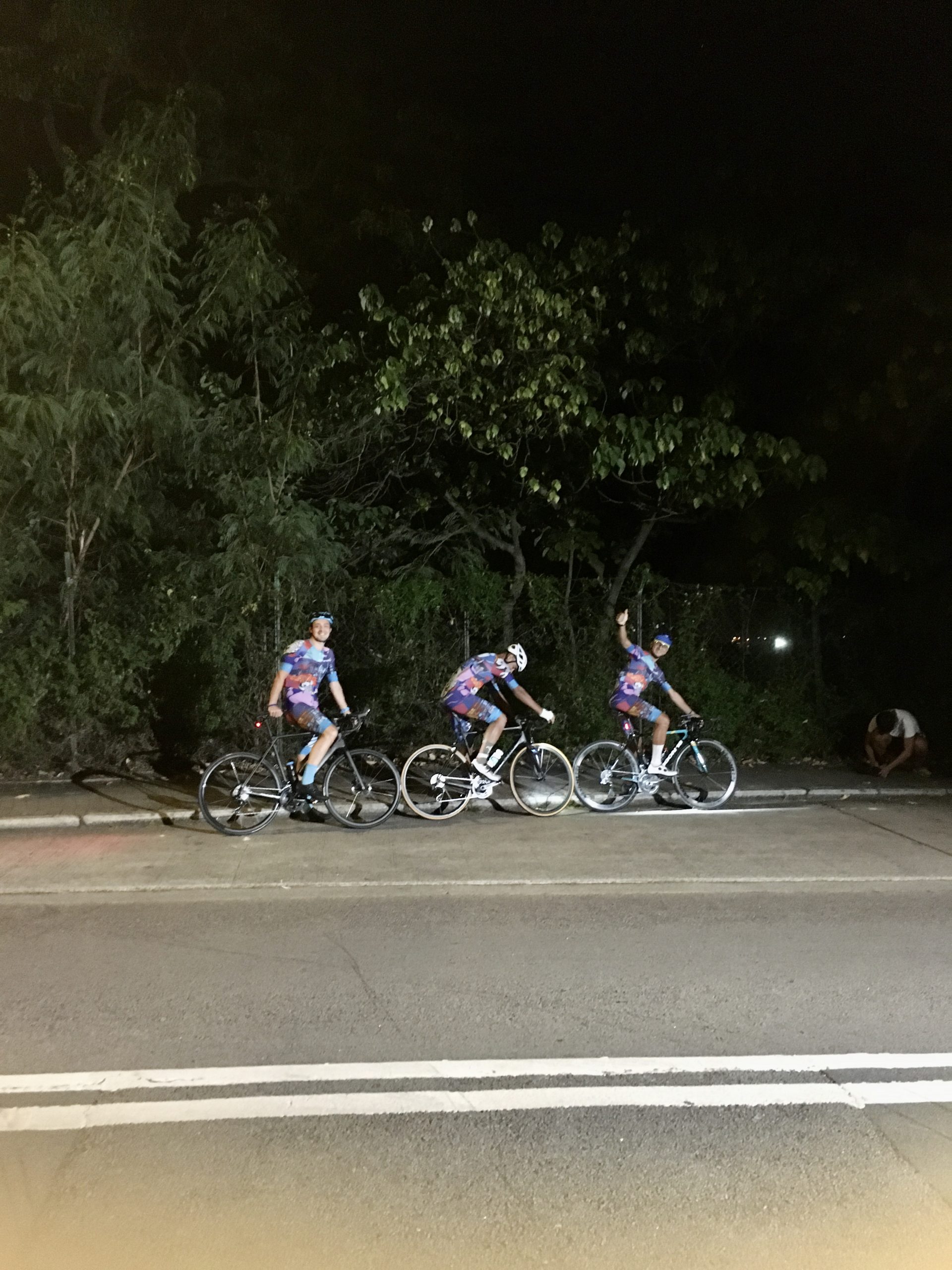 Vaid has done triathlons including Ultraman and Run the Rann, and set the world record for the Enduroman Arch to Arc Triathlon, the longest point-to-point triathlon.

Pu explains, “Mayank had to push through quite a few challenges to get to the start line of HK360Xtreme. In 2019, he had planned to complete the HK360Swim in a tandem solo, but due to his swim partner’s shoulder injury, they were forced to postpone the attempt. He returned in 2020 with a bigger challenge for himself. With three date changes due to typhoons, it became harder for Mayank and his crew to execute the event. During this attempt, he suffered through hypothermia, stitches on his ankle, severe sunburn, fatigue, a stomach bug, and strong oncoming currents during the swim in order to complete the feat. There were many moments of suffering where he considered giving up, but, thinking the lesson that he wanted to share his two sons, is that the most important thing is to finish what you’ve set out to do.

Mayank had to stop halfway of the bike leg, because of a stomach bug, fever and having to get the stitches on his ankle checked out for fears of it being infected after the swim. And that rest turned out to be 15 hours 3 minutes where he did sleep, which made his total bike time over 31 hours.“

Mayank completed HK360Xtreme with the goal of raising HKD 360,000 to support InspiringHK Sports Foundation and Outward Bound Hong Kong. HKD 320,078 has been raised up to date (November 10th) in order to provide underprivileged youth the opportunity to experience the joy of outdoor sports while also assisting local sports coaches and students affected by COVID-19 due to closure of sports grounds and classes.

He said, “I am absolutely humbled by the enormity of HK360Xtreme. Training for an event like this is very demanding and taxing. However, I learnt a lot about myself as I trained for HK360Xtreme. I am really thankful to my wife, Theresa Vaid, and my boys, Bono and Kavi, who supported me fully as I trained for the event. I am also thankful to my friends and swim, bike and run buddies who spent a lot of their time to help me prepare both physically and mentally for the event. I had the support of Mercedes-Benz, Rekitt Benckiser Move Free, Redbull, NRG Performance Training, Szabotage and RMRH who trusted me with the project for which I am grateful as well as honored.

The swim around Hong Kong Island is fun, but tough. Its visually simple, but technically unpredictable. In addition to three changes in dates due to typhoons in South China Sea, I experienced unexpected counter currents. A swim that was predicted to take 12 hours lasted 18 hours. I had excellent crew support and paddler. We didn’t quit. Despite the challenges, I thoroughly enjoyed the whole event. It was very well organized. The Marine Department and Marine Police were helpful and patient with us, whether it was with regards to the change in dates or on the swim day.

HK360Xtreme would not have been possible without Shu Pu. An event like this needs a race director like Shu who was with me as an observer, friend, supporter and guide all through the 70 hours. Shu trusted me with such a big undertaking and believed in me for which I am grateful. Seven years ago, I couldn’t swim 50 meters without having to stop a few times. Those 50 meters seemed so far away. And now I have swum around Hong Kong Island.

One can only dream of participating in an event of this scale.” 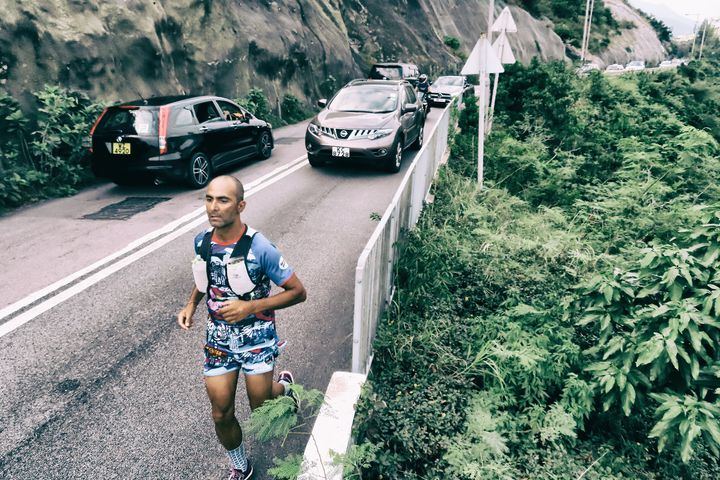 HK360Xtreme and HK360Swim are challenge events by Shu Pu, the founder of AVRA, an ocean lifestyle and adventure brand based in Hong Kong. “It’s a huge honor to be approached by Mayank to make this ultimate challenge happen. We’ve set a Hong Kong and world record with this attempt, while raising funds and awareness for a worthy cause. Sports communities have suffered greatly during this COVID-19 and we hope that this challenge can help support the Hong Kong sports community.

It’s exciting to have brought to life one of the toughest endurance challenge on the planet. We want to send the message out and share with the world that this ultra-challenge lives in Hong Kong and athletes can attempt it.”

Partners and donors of this cause include Mercedes Benz, Move Free, NRG Performance Training and Red Bull. In support of Vaid in his newest unique charity sporting event, Gustav Szabo, otherwise known as Szabotage, a well-known urban artist and designer, is auctioning an original artwork “Freestyle” to help raise funds for this cause. 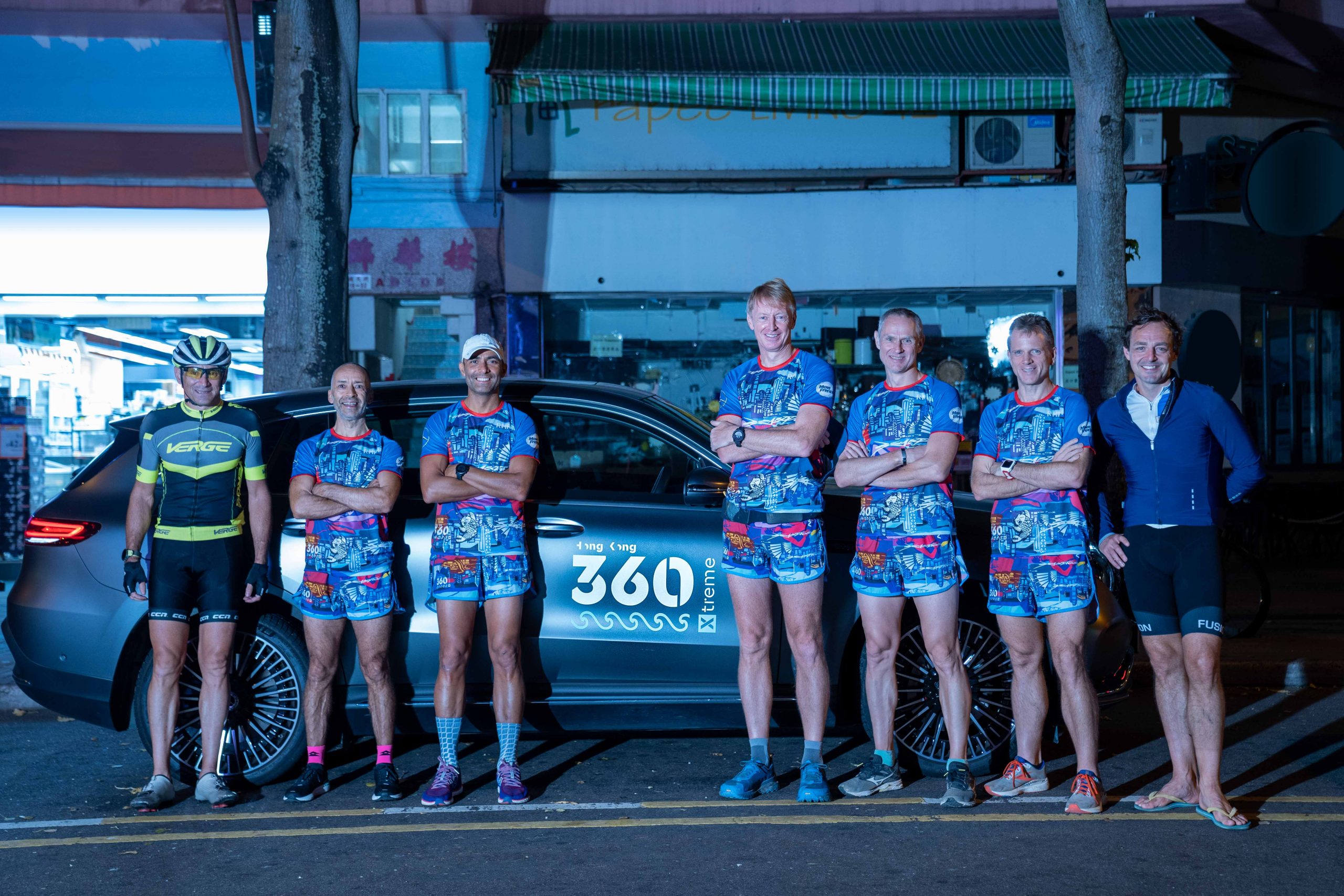