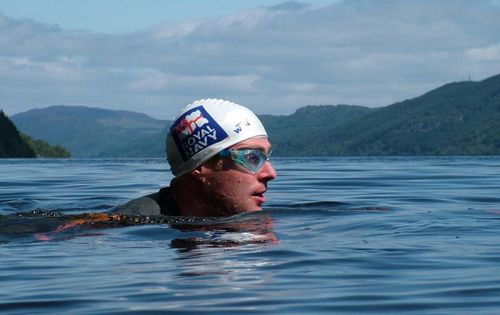 Seven members of the Royal Navy’s 1st Mine Counter Measures Squadron will attempt a charity swim for Canine Partners across the 22-mile Loch Lomond in Scotland on September 1st.

The purpose of Canine Partners is to assist people with disabilities, including members of HM Forces injured on duty, to enjoy a greater independence and quality of life and to help them into education and employment, through the provision of specially trained dogs, whose well-being is a key consideration.

In 2010, the Mine Counter Measures Squadron team raised over £5000 for the charity by cycling, rowing and running the equivalent distance from their deployed location in Bahrain, to their home port base in Faslane, Scotland; in excess of 8078 miles.

The aim of the Loch Lomond challenge is to beat this amount in order to fund the final year of training for our ‘adopted’ assistance dog, Xylo.

While the hardiest of British focused marathon swimmers may view the 12˚C waters as refreshing, the challenge cannot be underestimated for a group of average swimmers who are going beyond their comfort levels on behalf of their colleagues in the HM Forces. Beginning at the northern end of Loch Lomond, they expect to complete the swim within 15 hours at Loch Lomond Shores, Balloch. “The Squadron has close ties with Canine Partners and last year we raised £5,251 for them through our charity drive,” said Commander Bence. “We were thinking of ways we could top last year’s target and it was suggested that we undertake a charity swim. We are attempting it in relays.”