Mega Euphoria On Huntington Beach In The Sand And Water 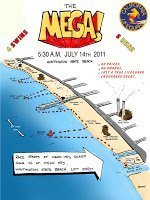 The Mega, also known as the Mega Colossus, is a beach endurance contest in the sand and offshore waters of Huntington Beach, California.

The The Mega consists of 5 beach runs totaling 8.5 miles and 4 ocean swims totaling 4000 yards. It is raw. It is challenging. It is a demonstration of the skills necessary for being a lifeguard in the occasionally rough, cold waters of the Pacific Ocean.

While celebrating the fitness, athletic talents, camaraderie and enthusiasm of lifeguards, the very real essence of a lifeguard’s workplace is simple: sand and water. And many times, the biathletes face really soft sand and really rough water.

With only two aid stations on the course, there are no entry fees, no awards, no wetsuits, no fins and no shoes allowed. Participants bring just their swimsuit and goggles, and trust that their endurance, speed and navigational abilities in the surf will power them to the finish.

“The hard thing is the transitions,” said former event organizer and local lifeguard Steve Hawkins of the numerous in’s and out’s.

“There’s the problem of transitioning from running to swimming and then running again. It’s definitely an endurance event. You not only have to be a good swimmer, but you also have to be an incredible runner.”

With hundreds of participants in The Mega each year, the informal demonstration of ocean endurance continues on since the 1960’s. Most recently, defending three-time champion Nick Sullivan has the potential to someday break the existing record held by Marc Rinzler, set in 2000, of 1 hour 28 minutes 45 seconds.