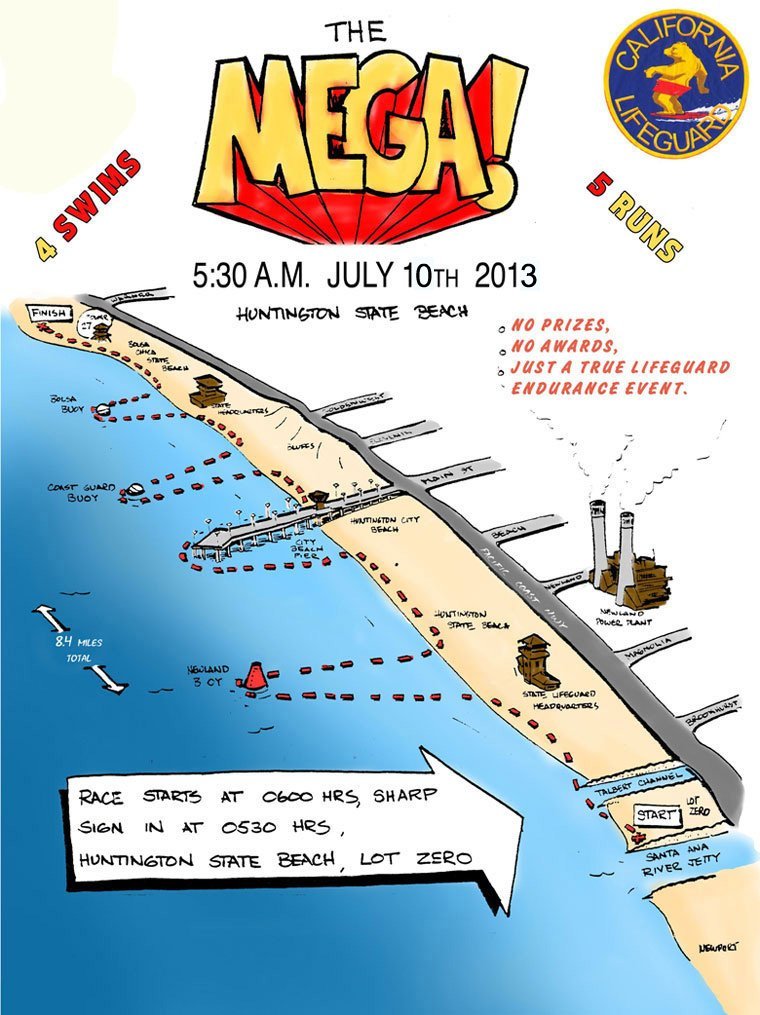 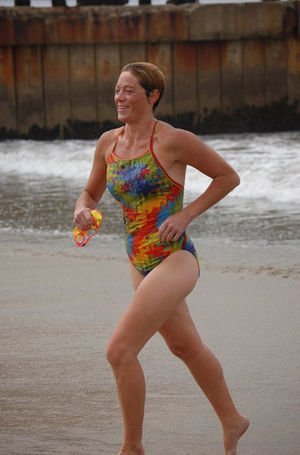 The Mega, also known as Megacolossus or Mega Colossus, is a Huntington State Beach Lifeguards Association-sponsored endurance contest in the sand and offshore waters of the Pacific Beach. Yesterday, the underground run-swim spectacular took place under gloomy skies.

The Mega consists of 5 beach runs totaling 8.5 miles (13.7 km) and 4 ocean swims totaling 3.65 km. It is an informal event with two aid stations on the course. There are no entry fees, no awards, no wetsuits, no fins, no shoes. Simply the coveted bragging rights. It is open to both municipal and state lifeguards who wish to challenge themselves from Huntington State Beach to Bolsa Chica State Beach.

Local ocean swimmer Amy Ahearn (shown on left) explains, “The lifeguards who first started this said it was ‘a gathering of friends to celebrate life.’

The eight-mile running course of the Mega starts at the mouth of the Santa Ana River and goes north to Warner Avenue, at the northern end of Bolsa Chica State Beach. Interspersed are four ocean swims to offshore buoy markers, including one swim around the 565-meter-long Huntington Beach Municipal Pier. The runs and swims break up the distance nicely, making the Mega the most enjoyable endurance event ever. It has been my favorite event since I started ocean swimming 10 years ago
.

“There was a lot of surf and lots of surfers, but it was a total blast! There was plenty of sand to run barefoot on as well!,” said Andrew O’Mahony, a resident of the San Francisco Bay area who came down the coast for the event.

Over the years, John Rodgers has done a great job keeping the enthusiasm of this event going and making it fun to do year after year. “I’m so glad that I have been able to participate for so many years and have earned those bragging rights.”