Megan Melgaard, Sweating Out A Test Of Endurance 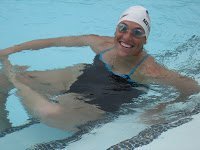 Megan Melgaard, a Renaissance Women of the open water world, pays close attention to the amount and type of water and hydration she takes in, but it wasn’t until recently that she learned how important it is to monitor the amount of water going out.

Melgaard, who races major endurance events across the globe and has worked with Hollywood actors and professional athletes to improve their swimming, took a sweat test in preparation for this summer’s pool and open water swimming events.

She entered a sweat chamber at the Georgia Institute of Technology Performance Lab in Atlanta, Georgia, where the conditions were blistering: 89.6°F (32°C) and 66% relative humidity.

Melgaard spent 20 minutes on a stationary bicycle, increasing effort and power output, measured in watts. The 32-year-old dynamo and world-class swimmer, who also competes in on and off-road cycling and triathlon events, was furiously pumping on the bike and by the end of the 20 minutes, appeared as though she had just come out of a pool.

The sweat scientist and sports nutritionist Namrita O’Dea MS, RD observed, “Megan naturally sweats much more than the average athlete. Her sweat rate is 2.1 liters per hour or 72 ounces per hour. Consequently, she needs to adhere to a specific program for hydration, especially in the days leading up to her event. Spreading liquids containing electrolyte mixes, such as nuun, Hammer Fizz, or Elete, on the day before an event is essential. She and her coaching staff must report and monitor performance so we can adjust her hydration needs accordingly.”

Melgaard explains, “My sweat loss rate has been a concern in the past, especially training countless miles on a bike in the hot Georgia summer, but I hadn’t realized exactly how much I was losing: basically the equivalent of a full 2 liter bottle in 1 hour! The test was very eye-opening and I want to ensure that while training and racing in the pool and open water, I am replenishing the proper electrolyte and water balance in the correct proportions for maximum athletic performance.”