Melissa Cunningham Honored Around The World 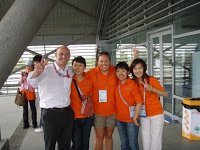 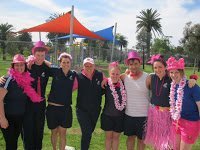 Australian world champion Melissa Cunningham was inducted in the International Marathon Swimming Hall of Fame as an Honour Swimmer, but she could not make it to this past weekend’s ceremonies in Cork, Ireland. Cunningham was recovering from breast cancer and preparing for her upcoming wedding so travel from Australia to Ireland was a bit difficult to arrange. But her husband-to-be Adrian Roberts arranged a surprise celebration for her, timed to run concurrently with the Hall of Fame celebrations in Cork.

She won the 25 km at the 1994 World Swimming Championships in Rome and remained a stalwart on Australian National Swim Team during its heyday in the 1990’s. She represented Australia well on the international front and was always swimming well in domestic events from Magentic Island to Townsville in 1991, 1993, 1994 and 1996. She received the Elizabeth Arden Open Water Swimmer of the Year by Swimming Australia Swimming, participated in a record-setting 19 hour 11 minute relay from Malta to Italy, and was selected as the Swimming World Magazine Female Open Water Swimmer of the Year in 1994. In 2008, she played a critical role at the 2008 Beijing Olympic Games as an announcer and administrator where she work day and night shifts preparing for the first Olympic 10km Marathon Swim.

“The day was so very special,” Cunningham recalls. “I was was blown away by seeing everyone I love in the same room that I burst into tears. During lunch, Adrian read out the nomination and what would was being read at the ceremony. Then my coach Dick Campion spoke. He bought a photo collage I made him when I retired and told stories of some of the swims. He then presented my International Marathon Swimming Hall of Fame sash and certificate. Then, through more tears, I was so overwhelmed. It’s only hitting home now.”

“The IMSHOF extends its hearty congratulations to Melissa on her selection. The Hall of Fame welcomes her into the fold of the truly greats in our sport of marathon swimming,” said Honorary Secretary Dale Petranech.

“Melissa carried the well-worn mantle of greatness by Australian open water women,” agreed Steven Munatones, Chief Administrator and Vice President of the International Marathon Swimming Hall of Fame. “She was a real tough competitor who just never let up. And she balances that competitiveness with a sparkling personality and real passion to help other swimmers. Her performance in Beijing was just as victorious as her gold medal swim at the 1994 World Championships.”

She remains a fighter with a smile and relentlessly positive attitude. She was diagnosed with Stage 3 breast cancer earlier this year and just finished her last treatment. In the process, Cunningham has become an ambassador for the McGrath Foundation where she is utilizing her passion and skills in the water to help others via the program, Every Stroke Counts.