Mellouli And Fogg Rip Off Fast 1.5km At Olympics 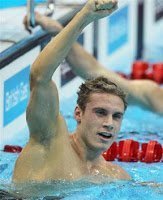 Mellouli told Swimming World Magazine, “”I’m just happy to get the first race in this Olympics. I had some problems with my shoulder bugging me for the last three years. It seems to be working pretty well this morning. I woke up mentally not 100%. I’m confident the race went well, I’m feeling pretty confident for tomorrow.”

Fogg commented, “It is less than a second off my best and to do that and be that close in the morning is really good. I feel in good shape and the preparation has gone well. The crowd really helped a lot during that race.

They were so loud while I was swimming which really helped me down the last 50m especially when it was really hurting
.”

The two men will be gunning for two opportunities to climb upon the Olympic podium tomorrow on the 1500m in the pool and 10km in the Serpentine – with Fogg undoubtedly being inspired by tens of thousands of cheering British fans.

Both men have the proven stamina to stick with the leaders, no matter what the pace. They also have demonstrated today that they have the requisite speed to close their 10km in medal-grabbing fashion.