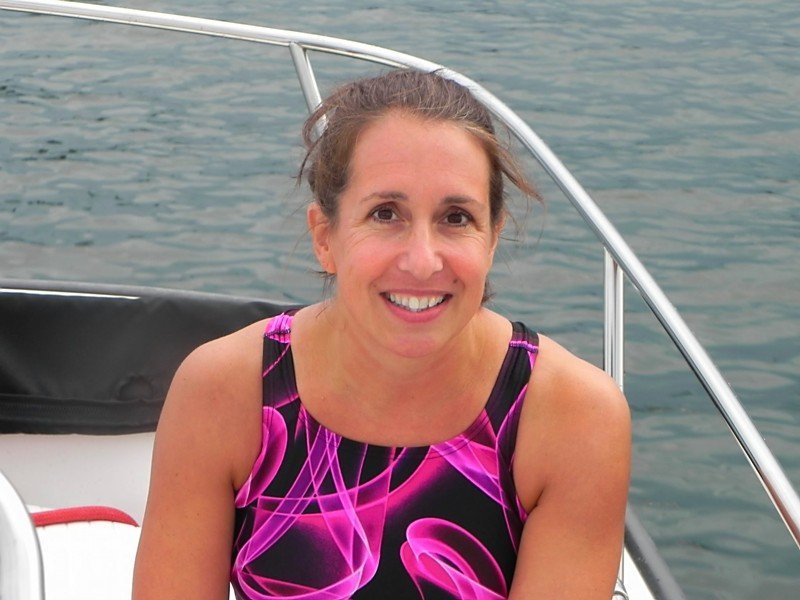 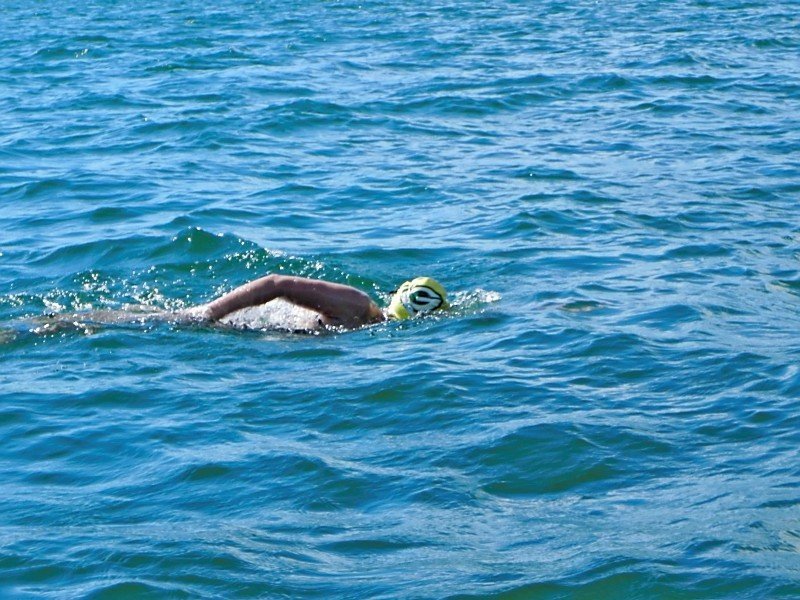 Courtesy of Melodee Nugent and Kent Nicholas at the S.C.A.R. Challenge.

It is clear that even while working full-time as a biostatistician of pediatrics and a mother of three children, Nugent keeps wanting more. “The survey was fun for me to do, since it is always more interesting to work on something you have a passion about.”

The Wisconsin dynamo started as a 100-yard butterfly specialist in high school, but the marathon swimmer is now stepping up her range participating in the 43 km Extreme North Dakota Watersports Endurance Test (END-WET) in 2013 and the S.C.A.R. Swim Challenge this year.

“I’m not competitive. It’s more for myself. My first goal is to finish, then to place in the middle of the pack. I like the challenge.”

A master of data analysis, Nugent knew what she had to do in order to prepare for her marathon swims. Every weekday at 4 am, she swim in a pool before heading off to work as well as much longer open water swim on the weekends in a local lake. Her passion for open water swimming and statistics is quite clear from the results that were created in Survey Monkey to see what swimmers thought of the S.C.A.R. Challenge. 31 out of 35 swimmers responded for a 89% response rate.

Summary
There are 31 swimmers that completed the S.C.A.R. survey. The type of questions used for this survey are mostly Likert scale questions (level of agreement or disagreement) and open-ended responses. For the Likert scale questions, they are often analyzed by combining the strongly agree/agree and the strongly disagree/disagree. Therefore, there are 3 groups: Agree, Neutral and Disagree. For the purposes of this summary, the percentage of strongly agree responses are noted in parentheses. By having a neutral group, that does not force people to answer agree or disagree.

Pre-Race Information
• The logistics provided on the website as adequate in preparing me for what to expect at each swim – 87% agree with this (42% strongly agreed).
• The map of the lakes was helpful – 84% agreed (37% strongly agreed).
• I reviewed the Suggested Equipment List in packing my swim bad for SCAR so I was prepared – 90% agree with this (52% strongly agreed)
• Open-ended responses:
o Some commented that you don’t really know about the layout of the lakes until you are really there
o Some more experienced swimmers have their own list of equipment to bring and didn’t look at the Suggested Equipment list
o Carpooling suggested
Social Event
• The social event the night before SCAR was worthwhile – for those that attended, 100% agree with this (80% strongly agreed with this).
• Open-ended responses:
o Introductions at the beginning of the event for all swimmers would be nice

Crew Finding Dry Bag
• I felt the crew members on boats were good at finding my dry bag and necessary items in the event I was too cold – 68% agree with this (45% strongly agreed).

Favorite Swim for All Swimmers
• Roosevelt – for the night swimming, swimming under bridge and conditions
• Apache – for the challenge and reward
• Canyon – for the scenery/beauty

Least Favorite Swim for All Swimmers
• Roosevelt – late start, too rough
• Apache – unfinished, too long
Comment from race director Kent Nicholas, “The comments regarding favorite swims and least favorite swims appears contradictory, but the detailed comments revealed an interesting aspect of open water swimming: the best aspects of an open water swim for some swimmers are identical the least favorite aspects for others.”

Favorite Part of SCAR
• Meeting all the swimmers and volunteers, socializing
• Finishing the swims
• The scenery/location
• All of it!