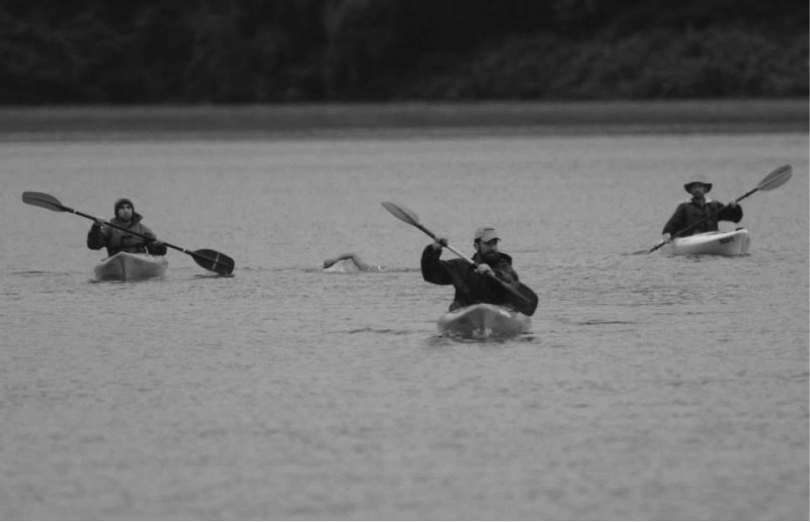 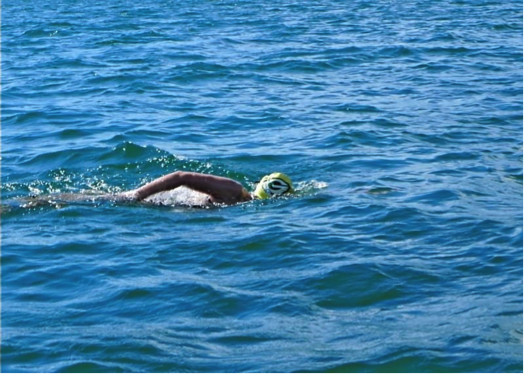 Melodee Nugent has done a lot of open water swimming – and plans on a whole lot more.

“My passion for open water and marathon swimming has been a gradual process; one that I would never have imagined when I started more than 20 years ago.”

Swimming has always been a part of her life. “I was born with hip dysplasia which was first noticed at a routine check-up soon after I was born. I was admitted into Children’s Hospital and immediately placed in a half body cast.”

As a result of multiple surgeries as a young child, she was never able to participate in impact sports because of a one-inch difference in her legs which caused a limp. “I vividly remember one of my last appointments with my pediatric orthopedic surgeon when I was 18 years old. He told me two things: watch your weight and you will probably need hip replacement by the time you are 40. Like most teenagers, I thought I was invincible at that age, but his words have always stayed with me over the years. Swimming has helped keep me in shape and maintain my weight.”

As for her expected hip replacement, it has fortunately not happened yet. “I tire easily from walking a lot, but if you put me in the water, I could swim for miles.”

She saw the doctor who first admitted her to the Children’s Hospital 8 years ago. “He wanted to observe my walking. Then he was curious as to how my hip looked after all these years. He was very pleased with my hip x-ray and said everything looked great. I credit swimming 100% to my overall health. Swimming is a low-impact sport, making it a perfect sport for me and others with similar joint issues.

There are many swimmers over the age of 40 because swimming is very easy on the joints. Unlike other endurance sports, specifically including running and cycling where athletes are subjected to rigorous pounding of their joints, swimmers can continue to get better as they age.”

Although she had always been on a swim meet since the 8th grade and throughout high school, she thought the 500-yard freestyle event was ‘crazy’. “I thought, how boring was that to swim 20 lengths of the pool in a race. But in college, I recognized that I loved to train and I stayed active by training on my own in the pool.”

After a layoff from swimming due to work, she decided to dive back into the pool in 1994. “It was not easy at first. The first day, I swam 200 yards and thought, ‘This is boring, what did I get myself into?‘” But she slowly started to increase her yardage and she soon felt like she had never left the pool. When she heard about United States Masters Swimming, her curiosity was piqued. “I have been a member of USMS since 1995. The first six months of swim meets, I swam the 100 yard butterfly and 100 yard backstroke because that was all I knew.”

But her goals were larger and longer. “I tried the 200 freestyle and realized that it was not too bad. I continued to push myself by increasing my distances, first to 500 yards, then 1000, and then the 1650. The more distance I would swim, the more in the groove I felt.”

It wasn’t too much longer before she tried her first open water swim. Despite being pregnant in 1996, she took the plunge in Wisconsin’s Lake Amy Belle swim. “It was a one-mile swim. That is when I officially fell in love with open water events. Between 1996 and 2002, I had three children and continued to swim throughout all of my pregnancies. When I was four days overdue with my second child, I swam two miles, including flip turns, before the contractions started. My son, Kyler, was born 2 hours later. I quickly bounced back from all three pregnancies; my doctors and I both believe that swimming should be credited for my quick recoveries.”

She continued to swim one to three miles, but had not ventured to any longer swims until her tenth year in the open water. “I decided to try a 5-mile swim in Minnetonka, Minnesota. I finished 27th out of 99 swimmers with a time of 2:17:51 – not too bad for my first long swim. In 2009, I swam the 8+ miles Swim for Freedom in Lake Geneva.”

By 2011, she was ready to really crank up the distance when she completed a 25 km marathon swim in Noblesville, Indiana. “That was a tough swim and I was very sore afterwards. But I finished even though the time limit was reduced to 8 hours because of storms. I finished 26th of the 27 who were able to squeeze under the time limit [39 swimmers did not finish in time or were a DNF].”

Now it was apparent that distance and time were on her side. “A friend convinced me to compete in the 27-mile END-WET in the Red River in North Dakota. This was a huge undertaking for me. In preparation, I spoke with a marathon swimmer and a marathon runner for advice. The advice was to spend more time in the pool training, straighten out my nutrition needs, and peak at the right times prior to the event. Knowing there was a river current was helpful, and I felt very good throughout the swim.”

Her Red River venture was a roaring success. She finished a close third in 9 hours 23 minutes out of the 12 experienced swimmers. “I felt great after the swim, just a little sore as expected, but good enough to find a bar where we could all enjoy a nice cold beer and share our experiences. I found my passion for marathon swimming. I enjoy the swims because I learned how to prepare for them.“

Since 2011, she has ventured far and wide to tackle different swims: the 10-mile Swim The Suck in the Tennessee River Gorge in 2012, the 12.5-mile Swim Around Key West in 2013, a Swim Across America relay across Lake Michigan from Chicago to Michiana, Michigan in 2013, the S.C.A.R. Challenge in Arizona in 2014 where she completed 3 of the lake swims covering 30 miles in 4 days, the 10-mile USMS Championship Swim in Minnetonka, Minnesota in 2014, and one of three swimmers to test the 18+ mile course for the Three Rivers Marathon Swim in Pittsburgh.

When she described her future, she remained characteristically optimistic and visionary. “I am always looking for a new challenge, and the world has no shortage of lakes, oceans, rivers, bays and channels to swim.” 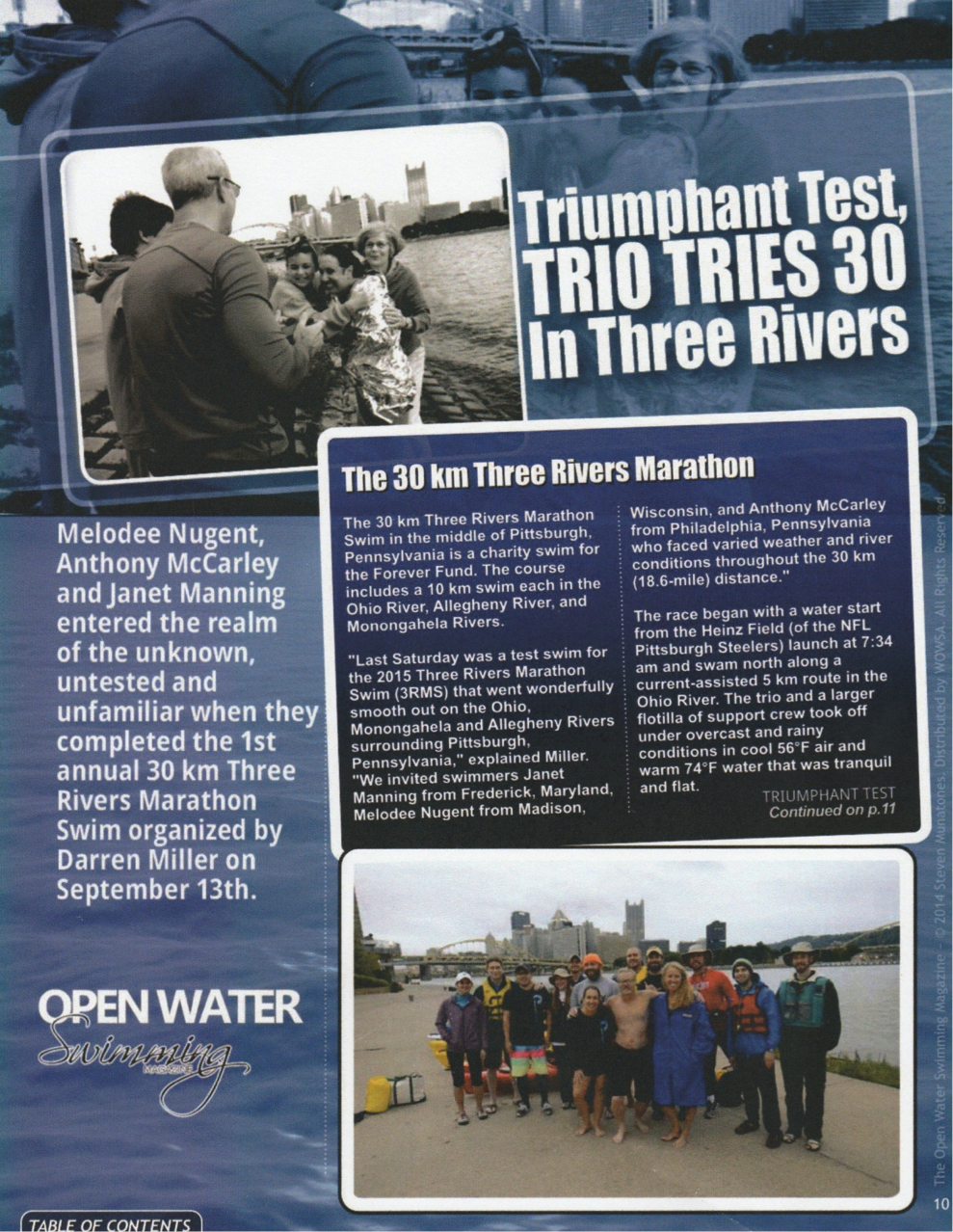