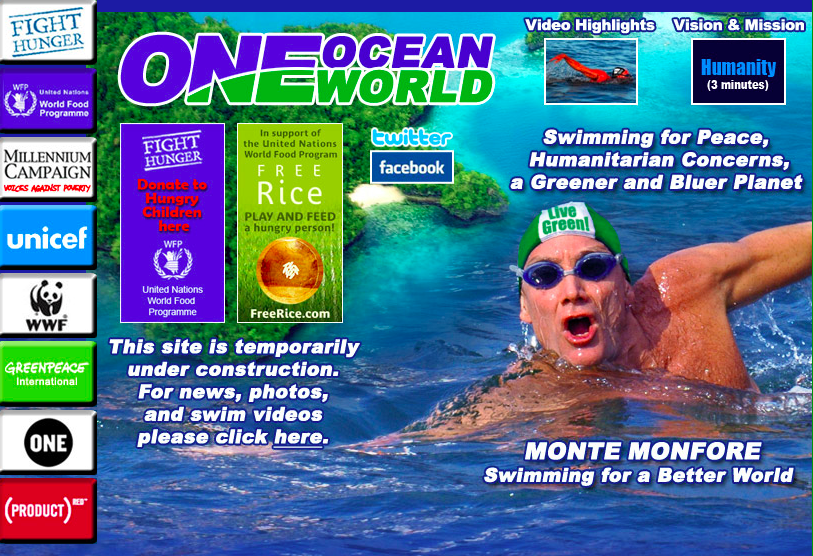 Back in the 1990s, four Americans swam the 3 km between the closest points between Bali (northernmost point on White Beach) to Java.

In 1997, International Swimming Hall of Fame Honor Swimmer David Yudovin had set the record crossing the 3 km strait between Bali and Java in 1 hour 36 minutes. The next year, Monte Monfore, a California-born water polo player and ocean swimmer, made his first attempt as a charity swim. That swim off a decade of goodwill swims.

The then 37-year-old described his course of action between Bali and Java. “A sailor and a surfer advised to make the swim on the half moon as this would be the period of least tidal movement. I decided that the swim should be made before the windy season, but at a cool time when I would not experience body overheating. I estimated from Bali to the closest point on Java was 3 km and the swim would take 45 minutes to 90 minutes.

Monfore later reportedly completed his Bali Fight Hunger Swim where he set a record in a two-way crossing of the Bali Strait in May 2006.

But Monfore was reportedly found dead by the Saipan Tribune on October 24th on Pinatang Beach in Songsong, Rota, in the Northern Mariana Islands. His exact cause of death is unknown at this time, but he did have a head injury sustained and was declared dead on arrival at a local health clinic.

A police investigation is underway.

His friend and personal doctor, Dr. Francois Claassens, told Saipan Tribune, “I cannot believe that he would willingly go into that water and expose himself. I don’t know how he found out about Rota. He came here to retire, to just come and live here, retirement in a quiet village.“

He was deeply committed to his causes throughout his career. He told Tempo Magazine in 2003, “I’d like to take this opportunity to campaign for the conservation of the beautiful oceans and reefs, which cover three-quarters of the earth’s surface. Awareness and diligence are necessary to safeguard this vital ecosystem, the protection of which is essential to mankind’s existence and survival.”

In promoting his Reverse Climate Change Swim on December 10th 2007, he explained why he swam. “My main objective is to swim in support of environmental and humanitarian causes. Another thing I hope to achieve is, in a small way, contribute to a better understanding between people of different parts of the earth. I live on the Hindu island of Bali, for example, in the middle of the largest Muslim nation and third largest democracy in the world, and I see a different face of Islam than is often depicted on television screens across the globe. I’ve traveled throughout this archipelago and have experienced nothing but smiling faces and kindness. I love this beautiful country and its wonderful people and plan to spend the rest of my life here. And it’s my intention to promote Bali and Indonesia internationally with my swimming whenever possible.”

Yanti Ardie remembers the legacy of her open water swimming coach and mentor. “Everything about his swimming was to make the world a better place for all life. I try to carry this spirit into what I do. He is in every aspect, not just water, a pretty incredible person.”