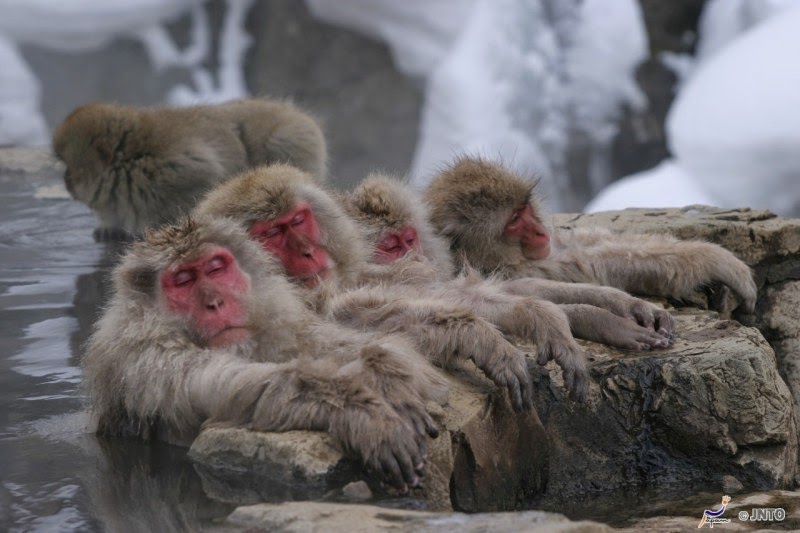 When we think of male open water swimmers and the animal kingdom, certain similarities come to mind:

The Satisfaction of a Warm Sauna
Men sitting in a warm sauna, enjoying the warmth after an open water swim in the cold ocean waters, are reminiscent of Japanese snow monkeys (Nihonzaru shown above) enjoying an onsen (hot springs) in northern Japan.

The clearly genuine satisfaction of warmth and camaraderie in a warm sauna or a Japanese onset are commonly shared by both man and monkey.

Drafting in Formation
A flock of geese or sea gulls flying along together in formation are reminiscent of a tight pack of competitive swimmers drafting off each other’s hips and legs.

The clear benefit to energy conservation and keeping track of one another, whether bird or man, are commonly shared among these species.

Acclimatization of Pinnipeds
Pinnipeds like mustached sea lions and seals with their marine comfort, seafaring skills and cold water acclimatization are reminiscent of some of the most hardened mustached and bearded homo sapiens of the male gender who are similarly very comfortable and talented in rough and cold oceans waters.

The clear acclimatization of temperature and turbulence of these social beings, whether pinniped or human, are characteristic of creatures very comfortable in the ocean.

Frantic, Adrenalin-fueled Running
Men running quickly and fanatically along the streets of Pamplona, Spain in front of charging bulls is reminiscent of men sprinting madly and shoving their way into the water at the major mass participation swims like the Travessia dos Fortes in Brazil, Cole Classic in Australia, and the Waikiki Roughwater Swim in Hawaii.

The clear intensity of the race, either away from bulls and in competition with their fellow humans are commonly shared by men on land and on shore.