Men Can Be Jerks In The Open Water 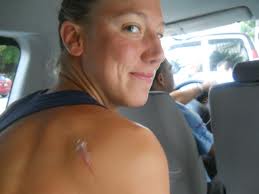 Men can be jerks.

Especially in the heat of a competition, around a turn buoy or immediately after an onshore start where everyone is scrambling for space. Men often swim over, hit, grab, pull and otherwise created improper and illegal advantages by impeding others – especially women – in competitive open water swims where the men and women start and compete together.

It is not usually the men who you may expect. It is not the male swimmer who will be standing on the awards podium after the race. It is often a swimmer with lesser abilities or experience that is also anxious to swim faster than anyone or everyone in his vicinity.

These men usually do not discriminate; they will swim over, hit, grab, pull and otherwise created improper and illegal advantages over men, women, teenagers and children alike. We hear this time and time again.

It is not right. We believe race directors should forewarn swimmers – of both genders – that such actions if sighted or documented will result in a disqualification.

On the flip side of the equation, we also read and hear of women who will kick or scratch others with their fingernails.

One Hall of Famer advises publicly, “In an open water race, it is not uncommon for people – men especially – to swim over you in order to pass you. When you find yourself being plowed over by a huge guy, let him know they’re swimming in your territory by giving them a little scratch. When they realize they can’t just push you aside, they’ll usually back off and chart their own course.”

While this protective move and counteraction can be justified by some, we think that everyone needs to respect their fellow swimmers at a much high level.

If a swimmer is so intent on gaining a small advantage among a large field, then we say to make this disqualification public knowledge and denote in the official results the reason for their disqualification (e.g., DSQ – for swimming over a 65-year-old woman or DSQ – for pulling on the ankles of a 12-year-old boy or DSQ – for scratching and drawing blood on another swimmer).

If the rules of open water swimming are pre-stated and explained to the field on registration forms and in pre-race meetings and the consequences of these improper actions are dealt with by official disqualifications noted in post-race results, we think the unnecessary and intentional physicality of overly aggressive swimmers will be reduced.