Men vs. Women In The Open Water 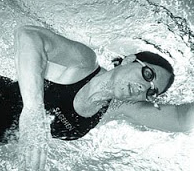 “Sex differences between the world’s best athletes in most events have remained relatively stable at approximately 8 to 12%,” explained Øyvind Sandbakk, Ph.D., managing director of the Centre for Elite Sports Research at the Norwegian University of Science and Technology, to Healthline.

“The exceptions are events in which upper-body power is a major contributor, where this difference is more than 12%, and ultra-endurance swimming, where the gap is now less than 5%.”

“In the 32-kilometer Catalina Channel Swim and 46-kilometer Manhattan Island Marathon Swim, the fastest women ever were faster than the best-performing men. Although these two races are currently the exceptions where women outperform men, the sex differences in open-water swimming are indeed smaller than in other sports.”

“While the data points to the accuracy of Dr. Sandbakk’s statements and research in the Catalina Channel swims and the Manhattan Island Marathon Swim, I think there are some additional surprising conclusions and generally unrecognized information about the sport,” added Steven Munatones of the World Open Water Swimming Association.

“Firstly, the record for the Manhattan Island Marathon Swim – like the Catalina Channel and the English Channel – has been held at separate times by both male and female swimmers throughout its history. At the time of Dr. Sandbakk’s research, Shelley Taylor-Smith held the record for swimming around Manhattan, but it is currently held by Oliver Wilkinson.

Secondly, there is an important differences among swimmers at the elite levels comparing the Catalina Channel and the English Channel. When Penny Dean set the existing record (back in 1976), she was young and nearing the pinnacle of her career. But there has not been a top professional male marathon swimmer attempt the Catalina Channel since Chad Hundeby crossed in 1993.

In contrast, many top professional men have made attempts at the English Channel and the men dominate history’s fastest times.*