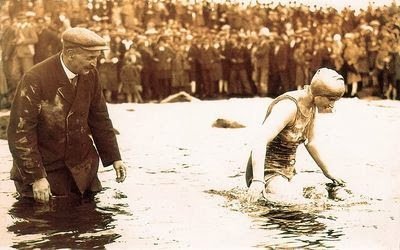 A philanthropist and marathon swimmer extraordinaire, Mercedes Gleitze of Great Britain was recognized formally by the International Swimming Hall of Fame (ISHOF) as an Honor Open Water Pioneer Swimmer for her body of work around the world.

Mercedes Gleitze joined the pantheon of aquatic luminaries along with the following other open water swimmers:

Gleitze, who died in 1981, became the first English woman to swim the English Channel in 1927 on her eighth attempt. She then tried to cross the North Channel several times without success. Three times in 1928, Gleitze attempted the North Channel crossing of the Mull of Kintyre from Donaghadee, Ireland to Portpatrick, Scotland, each time ending hypothermic.

In 1928, she became the first person to swim the 12.8 km (8-mile) Strait of Gibraltar in 12 hours 50 minutes, starting in Tarifa, Spain and finishing in Punta Leona, Morocco. That success catapulted her to a number of others marathon swims around Europe, Australia, New Zealand and South Africa. In 1929, she swam Lough Neagh in Ireland in over 20 hours. In 1930, she swam Hellespont in over 2 hours and a 30-hour endurance swim in Cork, Ireland. In 1931, she swam across Galloway Bay in over 19 hours and across Sydney Harbor. She swam in Cape Town, South Africa in 1932 to bring the total number of marathon swims to an incredible 51.

With the money she earned from her swims, she established the Mercedes Gleitze Home for the Homeless in Leicester, England which opened in 1933 until it was destroyed during World War II.