Mercedes: The Spirit Of A New Age To Premiere 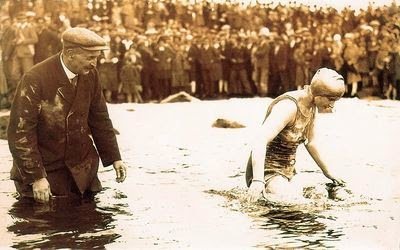  “It’s having the willpower to endure the cold and not be disconcerted at the nearness of porpoises, dolphins and even sharks, to bear the pain of aching shoulders, knees and shins and to remain floating in the water with your arm seized with cramp and remain unperturbed when a large steamer passes too near.

When you cannot have the hot drinks you’ve longed for and when an attack of sleep threatens to send you to the land of oblivion, but to have the courage to say I want to carry on
,” said Mercedes Gleitze in 1933.

Clare Delargy, producer and director of Mercedes: The Spirit of a New Age, explains about the long-passed heroine of the open water swimming world. “Mercedes Gleitze burst from obscurity with a series of impressive swimming feats to become one of the very first international sporting celebrities of the modern age. She was the first Englishwoman to swim the English Channel, an achievement she topped by tackling the Straits of Gibraltar crossing from Spain to North Africa – the first person in history to do so. Beautiful and brave she was worshipped by an army of admirers who flocked to witness her astonishing achievements.”

Mercedes: The Spirit of a New Age is a 50-minute HD documentary from Delargy Productions that is marketed as the story of a 1920’s London typist who defied the sceptics and swam her way to international stardom.

The documentary is being premiered on Foxtel on the October 16th at 9:30 pm (Australian Eastern Time Zone). “The documentary is essentially a record of Mercedes’s life and her achievements in particular. Initially the film is being shown in Australia and New Zealand, but it may find its way onto the company’s other channels worldwide if she performs well down under.”