On Mother’s Day, we honor motherhood and pay homage to our own mothers.

The history of Mother’s Day can be traced back to the ancient Greeks and Romans who celebrated and held festivales for their own respective mother goddesses RHEA and CYBELE. The more commercialized version of Mother’s Day dates back to 1908 and was the brainchild of Anna Reeves Jarvis who coined the day to teach women how to care for their children during the Civil War. 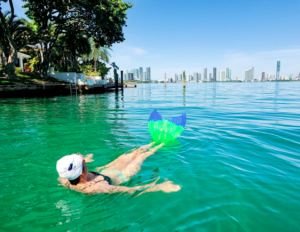 Estonian Merle Liivand wanted to honor the mightiest mother of all – Mother Earth – with a swim on May 10th. Liivand created the Mother Earth Swim where she was to do a mermaid swim with a monofin in a zigzag pattern around the Venetian Islands in Biscayne Bay, Florida. In addition to raising awareness about plastics in the open water, Liivand also planned to bring notice to the sea life that is suffering as mankind continues to use the oceans as a trash can.

One thing, however, did not go as planned as Mother Nature had alternative plans.

Liivand researched the local weather and was concerned about the safety of herself and her paddle-boarding entourage. She said, “I called the local NBC weatherman, and he told me there was a high risk of lightning in the area of the swim.” Not to be defeated, Liivand created a Plan B and quickly organized her group to move the Mother Earth Swim one day earlier. The swim went off as originally planned as she ended up monofinning 6.4 km around the islands.

Liivand said, “I believe Mother Earth wanted me to swim on May 9th as the waters were incredibly clear and welcoming. I did, however, find many signs of our neglect…plastic bags and other trash were collected throughout the swim. I want all swimmers to embrace the oceans as we come out of this global pandemic. I know many swimmers will turn to the open water to find aquatic refuge; all swimmers, swim teams, and governing bodies should take time to initiate change. I feel that ocean clean-ups should be an integral part of our swimming community with the hope that the Mother Earth Swim will grow.”