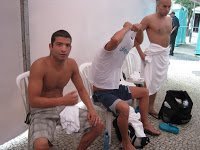 Luis declined the opportunity to represent Mexico at the 2010 World Open Water Swimming Championships in Canada in order to compete in the Central American and Caribbean Games in Puerto Rico.

Alejandra won in 2:20:01, four seconds faster than second-place Zaira Cardenas and Odette Saldivar who finished in 20:20:44.82.