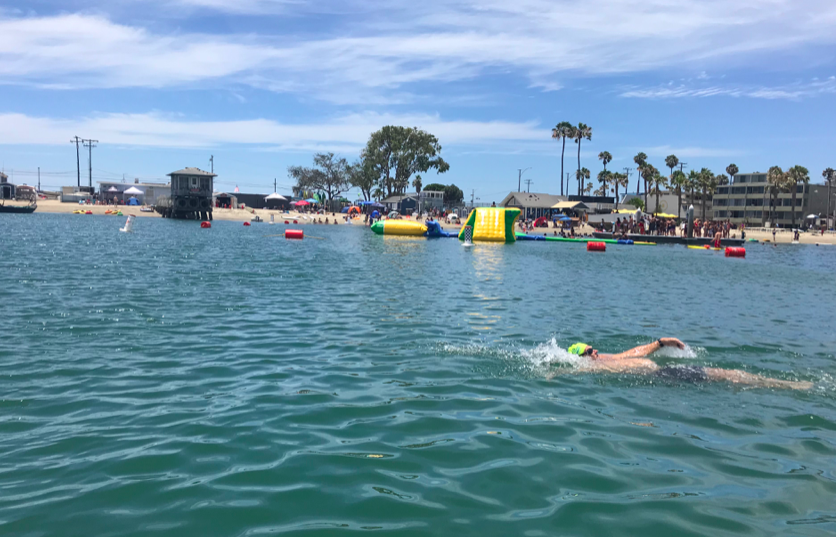 Michael Murphy will be the first person to complete the Naples Island Swim backstroke. His road to this unprecedented 3-mile backstroke swim began in 1993 when he was temporarily paralyzed due to ruptured disks.

This was a welcomed recovery because the 67-year-old had begun competitive swimming with his brother in Hawaii back in 1959.

But two detached retinas in 2001 led to temporary blindness and in 2012, he had the pectoral muscle on his right side and three ribs removed due to a bout with cancer. After two subsequent operations, Murphy has been unable to swim freestyle. “I do all my swims backstroke. After the last surgery in January 2013, I was back in the pool in April and completed his first Ironman with 2.4-mile swim in Arizona by November. I ride my bike mostly with one good hand, but I cannot stand up on the pedals or hold on the handlebars. I must come to a stop to take nutrition and hydration.”

After a series of knee injections and surgeries in 2016 and 2017, swimming was once again his prescribed activity.

“Due to my bad knees, my current training includes 2,000 – 3,000 yard pool swims twice a week with an open water swim each Friday, mostly at Corona Del Mar Beach, but also in Long Beach around Naples Island. I will continue this training until my 3-mile backstroke swim on August 12th.

On Fridays, I progressing increase my yardage from 3,000 to 4,000 to 5,000 and then repeat 3,000, 4,000, 5,000 as the year goes by. My training in the pool includes walking 3 – 5 miles in a 3.5-foot deep pool 2 – 3 times per week in the hopes of strengthening my knees. If my knees allow, plans are to participate in two full distance Ironman races, one the end of this September and the other the first of this coming December. If those are not possible, then I will do a half Ironman 70.3 the second weekend in December
.”

He explained his future goals, “With the end of triathlon either here or near, it makes sense for me to concentrate on open water swimming. My plans for 2019 include several distance events, but most have time cut-offs and my backstroke does not meet those times. Greg Shea, race director of the Naples Island Swim, kindly looked for a solution so that I could participate in the Naples Island Swim. He spoke of others that might understand and allow some type of exemption.

In the future, hopefully I can find some other race directors that will allow me to participate swimming backstroke as well
.”

For more information on the Naples Island Swim on August 12th, visit here.