Michael Phelps To Make A Huge Splash In The Open Water 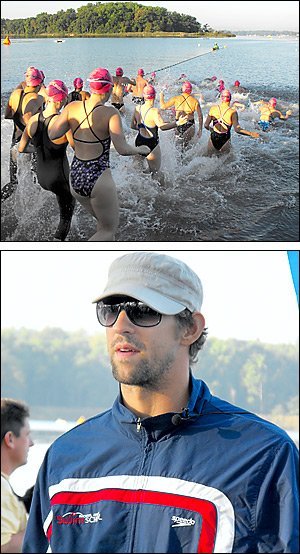 The media took those coy words as a hint of a possibility that the Olympic legend may seek a comeback before the next Olympics.

Whether or not Phelps returns to the pool, it is clear that Phelps’ swimming business (Michael Phelps Swimming) will be doing more – much more – about and in the open water.

Swim Across America announced its partnership with the Michael Phelps Swimming to hold clinics across the United States. “The clinics are designed specifically to prepare people for our open water swims,” explains Blake Chanowski, Vice President of the world’s largest charity swim organization. “It will be pretty awesome. The program is called BREAKOWT. We will pilot the program in Baltimore and Seattle this year and hope to launch it nationally. It just may be the thing that gets people to try the open water and go for it.”

Getting Michael Phelps Swimming to entice people to try open water swimming and educate them on how to be safe in the open bodies of water will be a major step in the evolution of the sport. “No one holds the public’s attention and respect like Michael Phelps when it comes to swimming. When he encourages Americans to take up the sport and be water-safe, this is going to be the biggest boon to the sport since marathon swimming was introduced at the Olympics,” predicts Steven Munatones of the World Open Water Swimming Association.

“50% of our swimmers every year have never done an open water swim before they participate in a Swim Across America event,” Chanowski says. “If we give more pool swimmers a way to feel confident and prepared, just think of how much we could grow. For more information, visit BREAKOWT.”

BREAKOWT is a series of intensive, 3-hour instructional sessions for pool swimmers who want to take on the challenge of open water swimming. The sessions are taught by Jessi Ahart of Michael Phelps Swimming. The Michael Phelps Swimming course will include training in sighting, stroke mechanics, breathing techniques, handling open water emergencies, training strategies, and navigating in shifting currents and other open water dynamics including extreme water temperatures. In Baltimore, the sessions will be held on September 7th and 8th; the Seattle, the sessions will be held on August 17th and 18th.