Michael Read Is Swimming Around the World…Twice 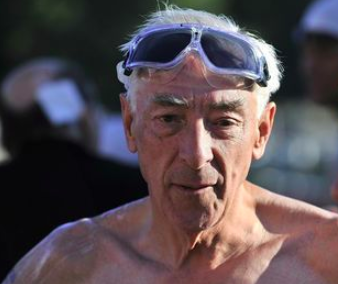 In addition to his induction in two Halls of Fame (IMSHOF in the Class of 1978 and the ISHOF in the Class of 2011), he was also previously honored with the International Swimming Hall of Fame’s Irving Davids-Captain Roger Wheeler Memorial Award in 2009.

The Poseidon Award is an annual award given by the International Swimming Hall of Fame to recognize those individuals who have gone beyond the call of duty and elevated the world of marathon swimming in a unique and lasting manner. It recognizes high level achievement from personal effort or initiative in a field of endeavor that contributes to the performance of marathon swimmers or to the development and status of marathon swimming to the world.

The award itself was created by International Swimming Hall of Fame artist-in-residence Jean Ermann Desimots and depicts Poseidon with his trident, presenting the laurel wreath of victory. The award is based on an original sculpture commissioned by gum tycoon, William Wrigley, Jr. in 1927.

Read, currently serving the long-time chairman of the Channel Swimming Association, has crossed the English Channel 33 times, but has also completed hundreds of open water swims during his career, most of which are of marathon distance.

And he continues to keep swimming. “I hope [to continue swimming]. I still have ambitions unfulfilled and I still need time to be able to accomplish them, So much to do, alas, so little time to do it.”

Read is shown above at the 16 km Faros Maratón professional marathon swim in Croatia in 2015. One of his latest marathon swims was in July 2017 where he placed 13th out of 20 swimmers, finishing the 24.5 km Toroneos Gulf Marathon at the age of 76 in 15 hours 5 minutes.

If we estimate that Read has very conservatively swum at least 2 miles a day for 360 days a year consistently over the past 63 years, a reasonable estimate confidently assumed, then he has swum approximately 45,360 miles (73,000 km) during his swimming career.