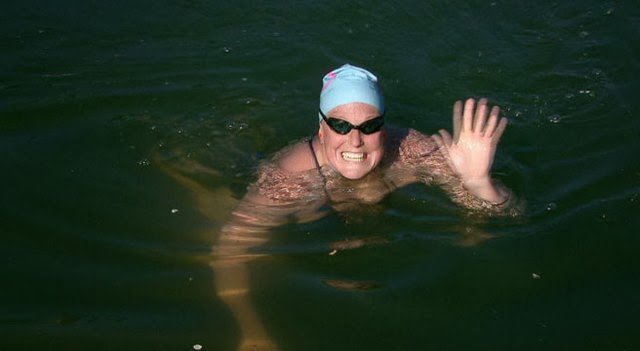 The work of Michelle Macy is never done. Swimming since before she could walk, the Oregon resident became the third person in history to achieve the Oceans Seven. But significant and rare personal achievements are not solely what make up one of the most remarkable athletes in the open water swimming community.

Macy is talented without a doubt. She is focused like few others. She has power and strength.

What makes her stand out is her desire to help others, to be part of the global community. She is always giving a hand, lending an ear and sharing words of advice.

Her recent speech at the Santa Barbara Channel Swimming Association banquet was typically inspiring and humble. “The speech was less about my swims, but [more] about being a part of the open water swimming family,” she described modestly.

Besides her Oceans Seven triumph that culminated with a record swim of the North Channel between Ireland and Scotland, she has assisted others on their own swims and completed her season with another record-breaking swim across the Anacapa Channel on October 26th and a charity swim in Portland’s Willamette River. She clearly embodies the spirit of open water swimming and possesses the sense of adventure, tenacity and perseverance that open water swimmers are known for.

As a nominee for the 2013 World Open Water Swimming Woman of the Year, Macy has earned the respect of swimmers in cold waters (North Channel) and warm waters (Molokai Channel) and everything in-between. Her nomination reads, “Her love of the sport knows no limits, she serves as support crew as readily as she dives in the water for her own marathon swims. Michelle Macy was the first American and third person overall to achieve the Oceans Seven. The full-time Nike employee takes enough time out of her busy work schedule to become one of the most prolific and accomplished open water swimmers in contemporary times. Without sponsors and without hype, the friendly, thoughtful, seriously-minded swimmer moves about the globe to cross channels and help others in their own quests. For her world record time across the North Channel, for her achievement of the Oceans Seven, for her joyful willingness to crew for other swimmers around the world, Michelle Macy is a worthy nominee for the 2013 World Open Water Swimming Woman of the Year.

Her fellow World Open Water Swimming Woman of the Year nominees include: