Michigan’s Mighty Mac Across The Mackinac 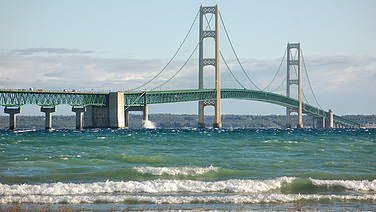 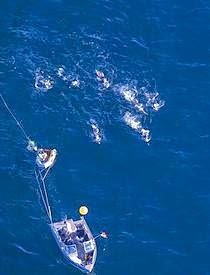 While Michigan Governor Rick Snyder is leading up to 65,000 walkers across the Mackinac Bridge on the annual Labor Day Bridge Walk on September 7th, those walkers will also be able to see 84 swimmers below them in the inaugural Mighty Mac Swim across the Straits of Mackinac in Michigan.

The athletes will be swimming in groups of seven, each group with an escort boat. Their goal is to finish near the Old Mackinac Point Lighthouse at Fort Michilimackinac.

The Mighty Mac swimmers will not only swim through the currents of the strait that connects Lake Michigan and Lake Huron, but they also have raised US$317,000 for the revitalization of Michigan neighborhoods through Habitat for Humanity. Neighborhood revitalization includes new home construction, renovations, repairs, and neighborhood beautification projects.

“I am so impressed with this team of swimmers we refer to as ‘Team Dire Straits‘,” said event director Jim Dreyer. “Swimming between Michigan’s peninsulas alongside the majestic Mackinac Bridge will provide an adventure of a lifetime for these athletes.

They have been pre-qualified, have been training hard for this formidable challenge, and they have really embraced the mission of Habitat for Humanity. They are checking an item off their bucket list while truly making a positive impact on families
.”

“We can’t thank the Mighty Mac team enough for their support of Habitat for Humanity,” said Kalamazoo Valley Habitat for Humanity Executive Director Don Jones, one of the Mighty Mac Swim’s beneficiaries. “It’s easy to talk about your commitment to the Habitat movement. These athletes are taking it to the next stroke — raising awareness and funds for affordable housing.”

“There is strength in numbers,” Dreyer added. “Pfeiffer Lincoln donated a 2-year lease on a new Lincoln MKC, which will be raffled off on Labor Day at the Mighty Mac Swim finish line, and Meijer joined them as a major sponsor. 84 swimmers have been selling raffle tickets for the car and getaway packages. Then The Original Murdick’s Fudge, Arnold Mackinac Island Ferry, and WOOD Radio came aboard with promotions to sell raffle tickets. This has been a real team effort to rebuild Michigan through an exciting event that will just keep getting bigger every year.”

For more information on the Mighty Mac Swim and the swimmers are posted at www.MightyMacSwim.com.