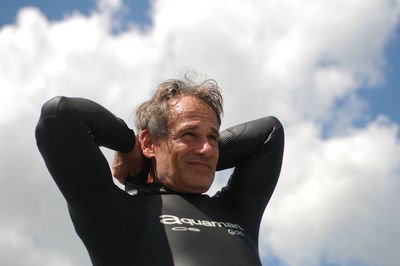 Mighty Mac Swim started as a charity swim in Michigan, but it quickly became one of the world’s greatest charitable events in open water swimming history.

But Event Director Jim Dreyer has even bigger goals. He announced that the annual Labor Day swim will now become an official race competition starting in 2016.

“Creating the Michigan Open Water Championship is a significant development. In addition to our new position on the world stage, The Mighty Mac Swim will be awarding US$20,000 to the overall male and female winners of the race. The award is suitable for a championship race of this caliber in Michigan, and on the international circuit.”

Competitors in the World Open Water Swimming Series accumulate points for overall world recognition. “The Mighty Mac Swim will draw some of the world’s best swimmers,” Dreyer added where an estimated 65,000 spectators will be watching the race from the bridge spanning the course.

The massive spectator base walks across the Mackinac Bridge next to the swim route, led by Michigan’s Governor every Labor Day. “The Mighty Mac Swim has become quite a spectacle for the bridge-walkers, and that has been taken to a much higher level now,” said Dreyer.

Swimmers must pre-qualify in order to participate, and only the first 79 qualified swimmers will be accepted on a first-come-first served basis. An 80th position will be auctioned for charity. Pre-qualification opened at 7 a.m. on December 15th and half of the slots were quickly snatched up.

A pre-qualification form can be downloaded from the event’s website at www.MightyMacSwim.com.

Participants must contribute US$5,000 through sponsorship or other forms of fundraising for Habitat for Humanity of Michigan. Proceeds will be used for funding grants, available to the 72 Habitat affiliates across Michigan, to perform good works according to their mission statement. In the inaugural 2015 event, the Mighty Mac Swim raised US$432,000 for the cause, making it the single highest grossing fundraiser for Habitat for Humanity in Michigan history, and making it the 12th highest grossing charity swim in world history.