Miguel Arrobas Conquers The Berlengas In Both Directions 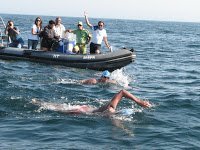 On August 7th, Miguel Arrobas, with the English Channel and Strait of Gibraltar under this cap, swam 16K from Baleal Beach on the mainland of Portugal to Berlenga Island.

These islands are currently among the 21 locations competing to be part of Portugal’s 7 Natural Wonders. 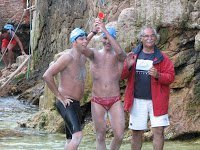 Miguel and Pietar attempted the first-ever crossing in this direction since Miguel is the record holder for the Berlenga-to-mainland (Peniche) direction, set in 2007). The Peniche–Berlengas area is particularly notorious for its heavy seas, strong winds and chilly water. The swimmers faced the oncoming winds, currents and 2-meter swells head-on.

Miguel and Pieter completed the swim in 5 hours and 3 minutes – and returned on a regularly scheduled ferry where they were warmly greeted by the vacationers and well-wishers.

In addition to their success, a five-person relay successfully swam from the Berlenga Island to the mainland (Peniche) in 4 hours and 53 minutes for the first time. 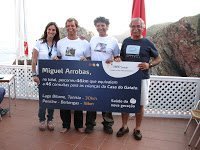 Miguel, a lawyer and father of 4, is also an ambassador for a group of Portuguese Private Hospitals which offers a full medical examination to a foster child from the Casa do Gaiato Institution of Lisbon for every kilometer he swims. As Miguel aims at achieving the Ocean’s Seven over the next four years, he is most definitely going to help many foster children.