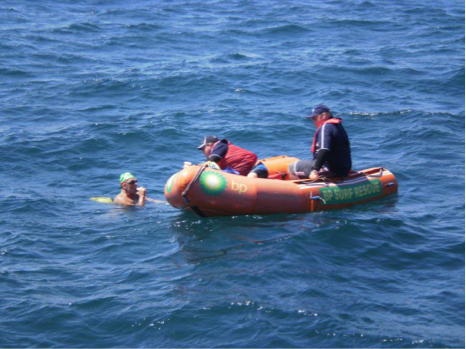 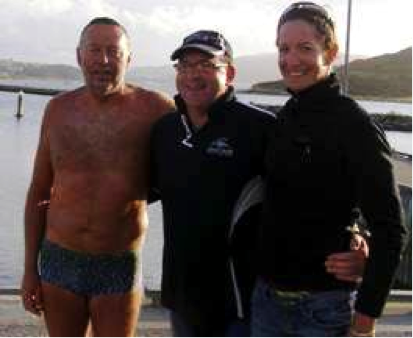 Story and photos are courtesy of Kirsten Cameron about Dr. Mike Bodger‘s attempt to swim the Cook Strait as a 60th birthday present to himself in February 2010.

This past week, our household had felt it had become experts on weather and tides. All day every day we have been checking the Met Service and discussing intently the possible implications of every isobar on that fabulously unpredictable stretch of water called Cook Strait. However, after the glorious day on Saturday and things not being ‘quite right’ for a good swim, we had rapidly come to the conclusion that despite everything we had been studying we knew stuff all about the weather.

So at around 7.30 pm on Monday night Mike’s mobile rings. As we had every other night since his window began, we all jumped. But this time Mike picks it up and says, “Your names Phil and I am off.” And this time the response was “Yes. Be at Mana Cruising Club between 4.30am and 4.45am tomorrow morning.”

We were all on! Then began the packing and preparation. Making the honey sandwiches, mixing up the drinks, the warm clothes, plus all the comforts that us poor sods were going to need on the support boat. At some point, probably far later than was ideal we got to bed for something that came some distance from a good nights sleep.

3.45am the alarms go and we are all up, bags in the car and away to Mana. It was a completely calm morning, a bit nippy still, but apparently it usually is at that hour.

We arrived at Mana and waited anxiously for Phil[ip Rush] and the crew to arrive. The crew consisted of Chris whose boat it was, Byron who co-skippered and plotted the map, Phil of course, and Paul who was to be Phil’s sidekick on the IRB. Supporters were me, Mike’s partner Keith, and Mike’s brother Pat.

We got all the gear loaded onto the boat and then it was a trip to the toilet block for one last go on land. There was only a small marine toilet on the boat so best to do what we could before we got on board.

Anyway, we were off, motoring out of Mana and heading down to the strait. It was just getting light and the sea was so calm. Not a breath of wind. We poked our noses out and Chris and Byron decided South to North was best, so over the strait we went to Perano head on Arapawa Island. We got there around 7am – about 90 minutes by boat. The sun was out by now and the sea was like glass, with this wide southerly swell drifting by. About half a metre – the height that a swimmer would barely notice.

So then began the final prep. Last toilet stop for Mike – in the marine toilet, then it was time to get those sexy leopard print togs on. And just to clarify, they are Fabiola Molini togs, not Speedos.

Then the next bit was for Phil to don the rubber gloves and get the industrial strength lubricant out. Commonly known as axel grease, this is the stuff that they use to grease trucks ‘nuts’. So to speak.

Next, Mike says cheerio and leaps into the IRB, nearly over-shooting it in his eagerness to start swimming.

The IRB nips over to the cliffs, and Mike is thrown over the side of the IRB into the sea. He swims over to the cliff, touches it and he’s off. By now on the boat, we were just bloody hungry so as soon as that was out of the way, it was breakfast, and then contemplate what we were going to do for the rest of the day.

He started off swimming really straight. His stroke looked good, long and strong and he was moving well. The tide was not pulling him down towards Tory Channel as they would have expected. Which is a good thing on one hand, but as it turned out was not so great as when the tide went the other way so much more strongly, he drifted too far north.

It was really just so lovely out there. A bit nippy still – the water was 15.1ºC, just glassy with the lazy swell. The sun burnt off the clouds by around 10am and it started to warm up for us on the boat – the water however remained around 15ºC, although Mike didn’t really notice it.

I had contemplated going for a swim – out the other side of the boat of course. But I tell you what, if I wasn’t sure that Cook Strait was too cold for me to swim in before this, I am more than certain now. I actually didn’t take my fleece off all day, and I had two woollen tops on under it.

For us on the boat, there actually wasn’t a lot to do. Although the swell had little impact on Mike swimming, for us in a launch chugging along really slowly, it actually wasn’t that great as it provided enough movement to make doing anything a wee bit of a challenge – especially if you were a little afraid of getting seasick. Little did we know what we had to come. We spent the time just going from the back of the boat, to the roof, to the cabin, talking: those boys have some stories to tell I can assure you, taking pictures, texting people with updates. Under different circumstances the bottle of wine I had brought with me might have come out, and food would have provided a good focus. We did make Keith wait until midday before he could eat lunch as we assured him it would make the day go quicker.

By lunchtime Mike was more or less halfway, and the wind was just starting to pick up. Nothing too dramatic but we were just aware of it and unsure as to how much it would pick up by.

A little while later, in the midst of the afternoon shift (i.e., having a wee catnap out the back of the boat in the sun), we were rudely awakened by a chopper – TV3 had come to visit.

So that was a real boost to everyone’s morale. At this point, the wind was much stronger and there were quite a few whitecaps around, but finding out that he only had 8 km to go, we felt really confident that it was all looking great. Mike was still in great spirits, smiling, completely lucid, enjoying his honey sandwiches, although his stroke had slowed a wee bit.

Then within the hour things had changed completely. The wind had got up to a 25 knot northerly, and the swell a 2m southerly. Combine the two and it was a complete washing machine out there. One of the radio stations asked Keith what was hard about the day so far. He said, “Hanging on.”

We had to back right away from Mike, as it was getting too dangerous for us to get too close. We had battened down the hatches well and truly and began to just move up and down behind him. Chris would say, “OK, hang on we are going around again.” And we would take this wide circle battling the waves – up and down, up and down, then a brief respite as we went in a line for a while back down past him, then around we would go and come back up again.

We were still pretty confident he could do it at this stage as the tide was starting to change so we were hoping in the eddy he would get through enough distance to get him close enough to make the last dash. However, the tide turned quickly and started pulling really fast. By 3pm when Byron took his position, he hadn’t moved forward enough and was being dragged north.

We crossed our fingers as best we could while we were hanging on, and willed Mike on. Next position was no better, in fact he was now moving due north. At 4pm Phil told Mike there was a bit of a problem, and after that we felt he had picked up. But the tide was moving way faster and he was going still further north. With the curve of the coast he went from being 5km away from shore to being 7km away. Pat and I discussed seriously telling him to swim to Mana – he was heading that way anyway. At worst, he could always hang around Mana Island on the tides for three days.

We looked at when the next tide was. Three hours away. So that would mean Mike battling on for another three hours in the hope that when the tide turned he could make a break. But who knows where he would be by that point, not to mention how much energy he would have left after battling the waves, winds and tides.

Around 5pm, Phil put it to Mike. He wasn’t too cold, he wasn’t sick, he was just knackered, so to keep battling for another three hours – wasn’t going to happen. He said he was coming in.

They pulled him into the IRB remarkably easily and came back to the boat. Getting from the IRB to the boat also went remarkably smoothly as it could seriously have been a problem. He still managed a smile as he came on board. First thing was the get some clothes on him. And get his togs off him.

He had to sit down for a minute and then he started heaving. After 9½ hours in the water, then to sit upright on the boat must have been hard. Everyone was impressed with his heaving – he was pretty loud. So then he was brought inside and wrapped up in blankets. I can assure you that although I hadn’t felt sick all day, then being able to see and smell someone else’s sick was enough to all but set me off. I spent the trip back to Mana sitting outside in the fresh air.

Mike went straight to sleep, flat on his back snoring. And we headed back to Mana – a trip that took us the best part of two hours. By then we were all craving land – our hearts sank when they told us it would take that long. It was amazing how calm it was further north, and before we knew it, we were back, with the TV crew and DomPost waiting for him.

After his nap, Mike was in fine form. Chocolate biscuits first up, and then back in the togs for some photo shoots. Eventually we got away and were back home about 8.30pm with Fish and Chips for tea, complete with the feeling that we were still rocking and rolling. Once in bed, I know I had to put my hand on the wall to assure myself I really wasn’t still moving.

All in all, it was a fantastic day and a fantastic experience. He didn’t quite get to the finish, but in the grand scheme of things when you consider how much he did achieve, it was more than awesome. He swam in total 29km. The strait is actually only 23km. It is such a fickle stretch of water that not making it across invariably has very little to do with how good a swimmer you are. And after Tuesday, I can well understand why. As Sir Edmund Hillary said of Mt Everest, you don’t conquer it, it relents.

I feel really honoured to have been there with Keith and Pat on the boat. As we all said, now we know how the whole thing goes, we are looking forward to Mike doing it again next year.