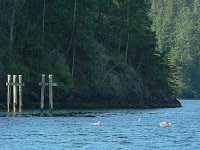 Bowen Island is in Howe Sound near Vancouver, Canada. A popular destination, Bowen Island offers stunning vistas for a small number of inhabitants. 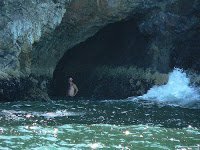 Mike started near Snug Cove at 5 am in respect of the ebb and flood tides. Mike’s crew of Brent Hobbs, Rod Craig and Dustin Henderson, joined him from time to time.

The waters around the east, and north of the island were friendly, but some wind-induced surface chop on the west end tossed the swimmers around.

In compensation for the lumpiness, the west end offered sea life to divert attention from the roller coaster, with starfish carpeting the seabed. Where Bowen Island looks out across the Georgia Strait to Vancouver Island, Mike and his partners faced more tide and a bath of cooler water, but that didn’t affect their moods. The final push to Snug presented a lot of outcroppings to swim around. Mike finished in about 10:30. 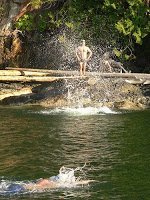 Mike, Brent, Rod, and Dale will be back in British Columbia’s waters again in late June for a swim across the Georgia Strait from Nanaimo to Sechelt; a final dress rehearsal for both Rod and Mike before they tackle the English Channel in July and August, respectively.

Mike’s Bowen Island and Georgia Strait solo swims, plus stories of numerous other English Channel swimmers and his own English Channel challenges, will be featured in his upcoming book Dispatches from Dover.