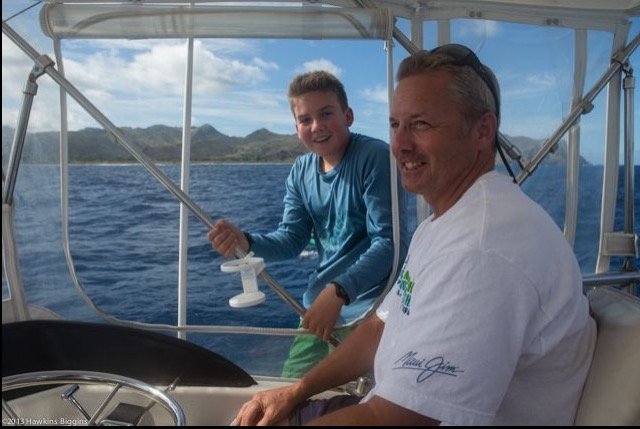 Michael Twigg-Smith was born in Hilo, Hawaii, but he now plys his trade between the islands of Molokai and Oahu.

The captain now specializes in escort boat services for open water swimmers and relays across the Molokai Channel (Ka’iwi Channel).

Twigg-Smith’s entire life has been around the water. He played water polo and swam competitively at Punahou School on Oahu, traveling to Australia, New Zealand and California to compete. He paddled 6-man canoes for the Waikiki Surf Club and Waikiki Beach Boys across the Molokai Channel, competing in the renowned Molokai Hoe 7 times. He is also a surfer, wind surfer, and member of Heartbeat sailing team of the Waikiki Yacht Club.

Since 2003, Twigg-Smith has escorted athletes and all types of watercraft across the Molokai Channel on his boat Stellina Mare.

In 2015, he had three DNF’s (Boguslaw Ogrodnik of Poland due to currents, Steven Junk of Australia due to seasickness, and Romano Mombelli of Switzerland due to man o war stings), but he successfully escorted the brother duo of John Royer and Mark Royer in a rain squall (14 hours 30 minutes), Attila Mányoki of Hungary (12 hours 2 minutes), and André Wiersig of Germany (18 hours 26 minutes).

In 2016, his escort of Daniel Curtis of U.S.A. was cancelled due to extremely large surf, but he escorted Antonio Argüelles Díaz-González of Mexico on his longest crossing to date in 23 hours 18 minutes.

He spoke a bit about his Molokai Channel crossings:

Daily News of Open Water Swimming: When is a good time of day to start the swim?

Michael Twigg-Smith: It is best to start the swim so that we arrive at Sandy Beach on Oahu in daylight. The shoreline at Sandy Beach is not suitable for night landings. This means leaving Molokai in the late afternoon or evening before midnight to allow ample time to arrive before the next sunset.

Daily News of Open Water Swimming: What is the best tide to make the swim?

Michael Twigg-Smith: The best tides for this swim are mild tides. Extreme tides can cause more current in the channel. Ideally, the swimmer needs a falling tide when leaving Molokai and a rising tide when approaching Oahu. More important is the rising tide as we approach Oahu, as a falling tides tend to create currents moving away from the island.

Daily News of Open Water Swimming: Can the swimmer ride on the escort boat up to Molokai?

Michael Twigg-Smith: It is recommended that the swimmers and crew take the short 25-minute plane ride to Molokai because seasickness can be an issue on the ride up, which would not be a good way to start a 12-24 hour swim.

Daily News of Open Water Swimming: What do you do at the end of the swim?

Michael Twigg-Smith: If you have people meeting you at Sandy Beach, it’s best if you ride with them to meet up with the escort boat back at Waikiki Yacht Club to gather your belongings. The car ride and the boat ride take about the same amount of time; usually the swimmer is in no condition to re-enter the water swim back through the shore-break to the escort boat. If there is no car ride at Sandy beach, the escort boat can take the swimmer back to yacht club.

Photo above shows Michael Twigg-Smith with his son Aidan.