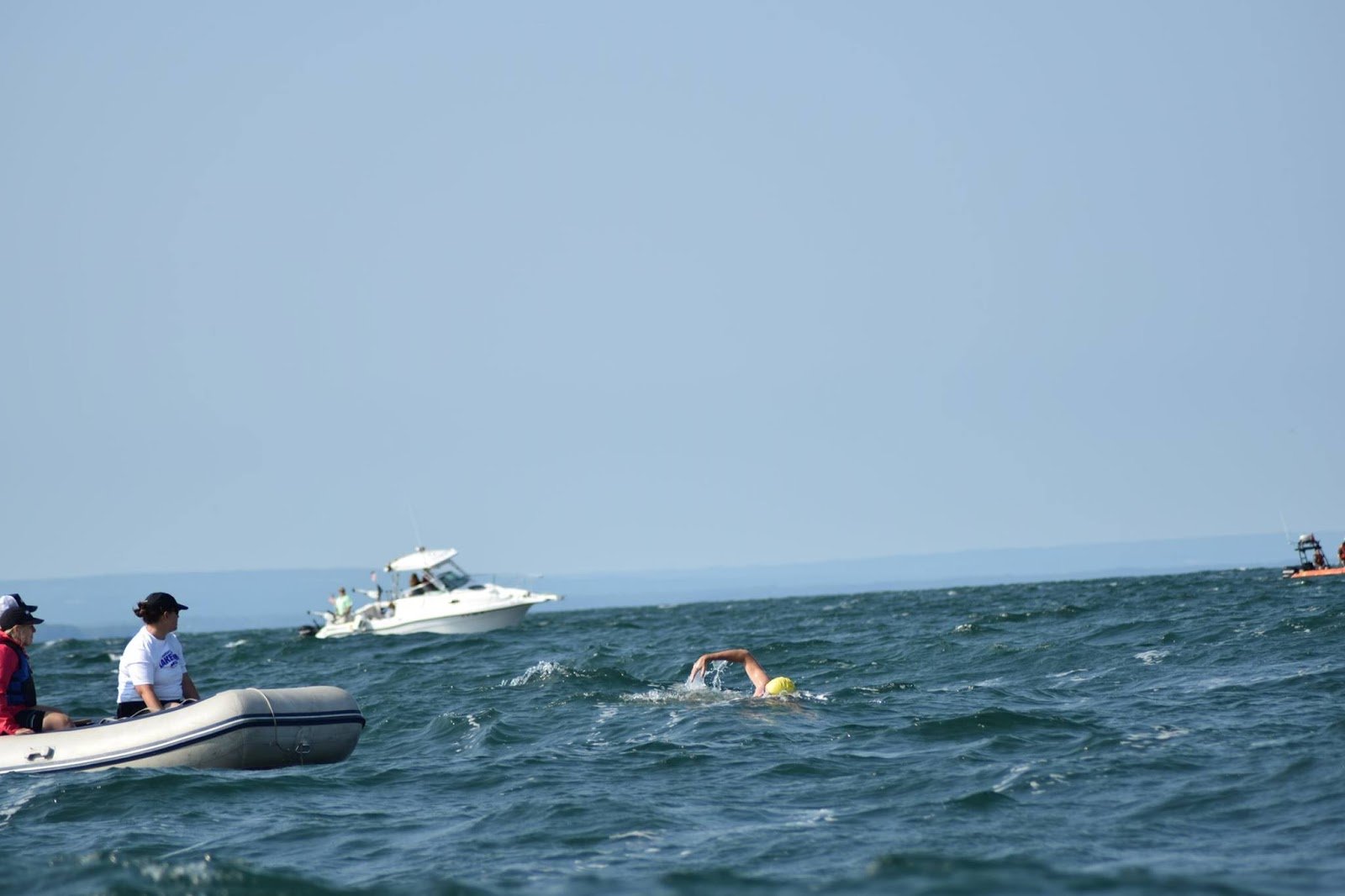 Joshua Reid and Miguel Vadillo long planned and organized the inaugural 20 km Embrace the Challenge, a 20 km cross border swim across Lake Erie between Canada and the USA.

The race was originally scheduled for Saturday, August 19th, starting on the eastern Lake Erie from Sturgeon Point in New York, USA and finishing at Crystal Beach in Ontario, Canada. But the winds were too strong to hold the swim on Saturday, so the race was postponed until Sunday.

But even on race day, the wind predictions were off. “The winds were twice as strong as predicted,” described Vadillo. “The winds were forecasted to be between 7-15 km per hour, but we had winds of 29-35 kph with gusts up to 40 kph.”

19 swimmers (13 soloists and 6 relays) started at 8:56 am on the American side and headed to Canada’s Crystal Beach escorted by motorboats and kayaks. “With the conditions, it took a long time to get all the boats ready. We knew it was a tough swim. It was not an easy one; it was doable. Bob Hayes was less than 2 km from the finish when we decided to call the race.”

The race was called because of the conditions and because Canadian Michael Kelly of Cambridge had become separated from his escort crew and was nowhere to be found.

“Josh called me while I was assisting another lady and helping her as part of her crew. A rope had caught up in its propeller and we eventually pulled her out of the water and took her and her crew to the Canadian side of Lake Erie,” explained Vadillo.

During this time, Michael’s boat had ran out of gas. He kept on swimming and his crew told him they would catch up to him, but they lost sight of him in the 6-7 foot waves as they were refueling. “Michael is an experienced swimmer and he didn’t panic. He was not frightened and he was swimming in the right direction. He was able to see the lighthouse near the finish of the race as he swam over the peaks of the waves. The waves were really rough with some big swells. He wasn’t disoriented and was swimming well.”

“During the hour of not finding him, Josh also called each escort boat and the entire flotilla turned into another search-and-rescue boat. But he was still not found after an hour.”

The Coast Guard had a high-speed boat and sonar that was able to recognize the shape of the swimmer. With their technology, they were able to find him quickly.

As usual and can be expected from swimmers of different backgrounds and abilities, there were a variety of reactions due to the race cancellation. “The conditions were rough. I puked 2-3 times and even though swimmers were making progress in the water, their crews were suffering. I don’t know how long it could have lasted because people were waiting for us to make decisions.”

“We wanted to make history with a cross-border competition, but we found a mean wind god that made the lake angry and that made swimming very difficult for anyone. Josh and I have our deepest respect and gratitude for their participation.

We do this things because are challenging and today we were challenged and more, but we also want to be here tomorrow to tell the story. We are glad that we all made it back safe and Michael Kenny was in the best scenario possible under the circumstances: healthy, swimming with determination even without his boat and in good spirits even when we all were frightened. Kudos to all participants, officials, and crew who – without hesitation – set apart everything to go out in search of a fellow swimmer. It was very moving to see and feel that support and makes up for the disappointment of the overall result
.”

Kenny calmly told the Buffalo News about his mindset in the turbulent conditions. “I sort of looked around and said, ‘Well, I’m sure they’ll catch up.’ But by that time we had got so far apart and with the huge waves, I knew they couldn’t see me. I couldn’t go back, the waves were high. So I just kept swimming and swimming until the Coast Guard came along and told me I had to get out.“.

When the Coast Guard boat came up to him in the rescue, Kelly showed the innate mindset of marathon swimmers. “In my mind the race was still on. I knew that if I got in that boat, my race was done. I wanted to stay in the water, but they wouldn’t let me. I do feel responsible for all these swimmers not finishing the race. Because I was missing they called the race, and sent people out looking for me.” 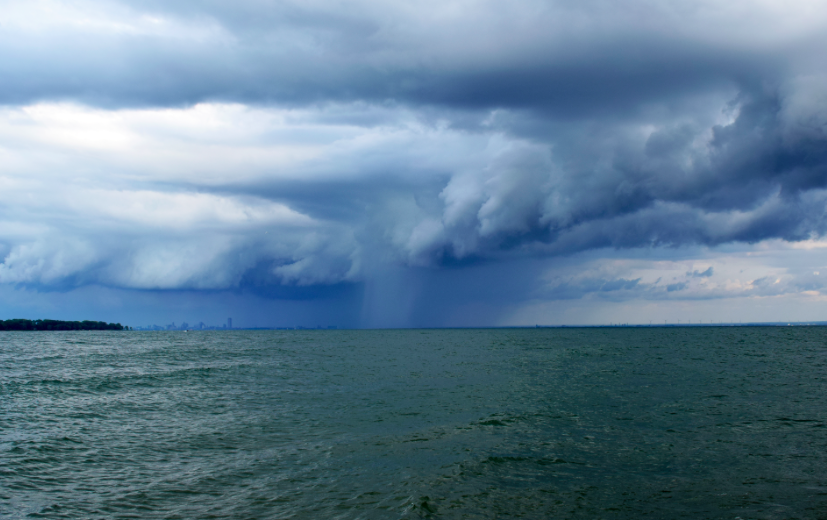 Reason for one-day delay in start. 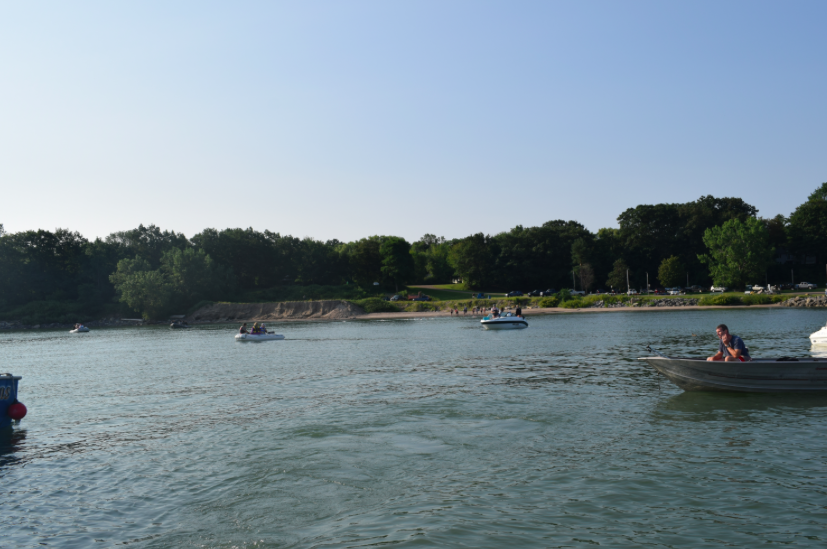 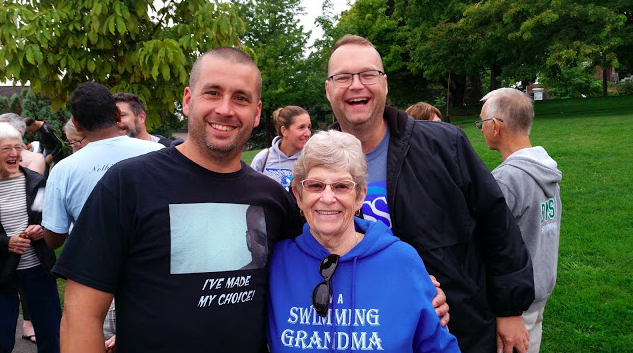 Michael Kelly with the legendary Marilyn Bell and Joshua Reid, co-director of the Embrace the Challenge Lake Erie 20 km. 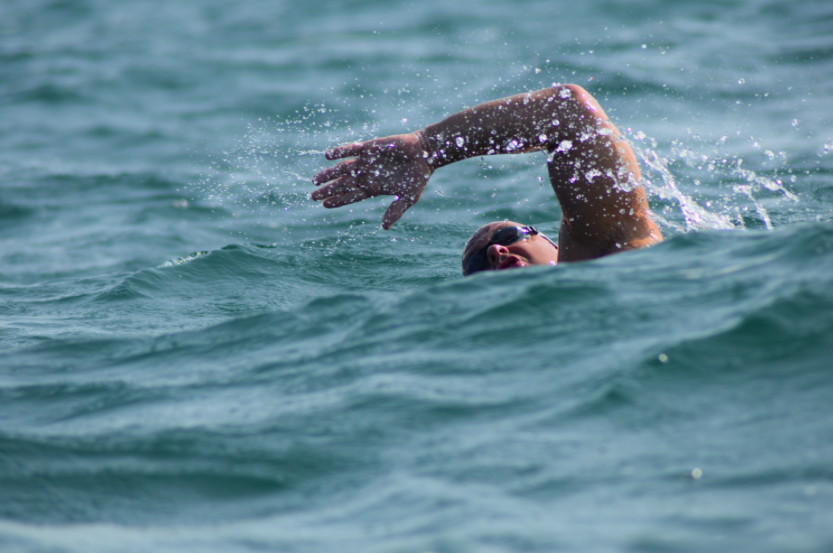 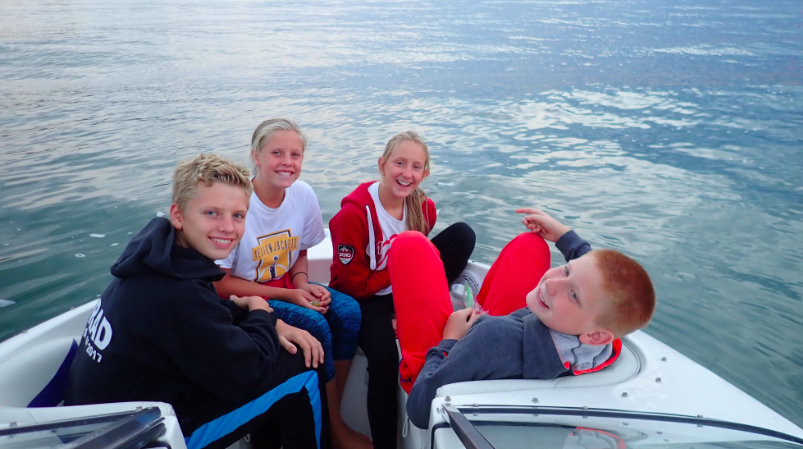 The 4Kids4RedRoof team includes (left to right) 14-year-old Noah Schouten, 12-year-old Leah Schouten, 11-year-old Mallory Doppenberg, and 12-year-old Everett Prichard who raised over US$10,000 for Red Roof that provides respite care for families with members with special needs. The kids were worried they would have to give back half of the money raised because they only swan halfway.