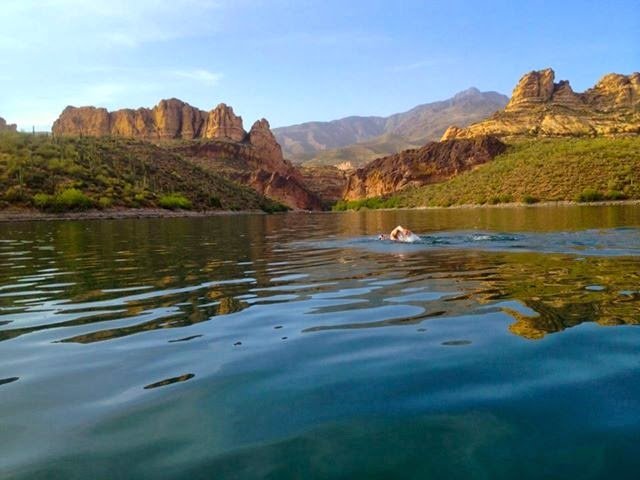 Mo Siegel is 63, but that does not stop him from running a firm in New York City and training like someone 40 years younger.

Not only has Siegel cranked up his solo swims over the last few years, but he is also entering all kinds of marathon swimming competitions this year. Siegel is kicking off his season with the 4-day S.C.A.R Swim Challenge, a 40+ mile stage swim in Arizona.

He has also training for the 2014 In Search of Memphre, a massive 25-miler in Vermont. “We’re excited to welcome Mo and another group of swimmers from around the United States,” says Phil White of the Kingdom Games and founder of the 25-mile crossing of Lake Memphremagog.

“A wonderful roster has signed on for In Search of Memphre 2014. This year for the race in September, we’ve significantly expanded the patrol boat support, so we still have room for up to four more swimmers. There are two guarantees in the swim: 1. Every swimmer will receive a complementary one pound bag of Brault’s beef jerky, and 2. The winds will be unpredictable.”

But Siegel will not be the only swimmer pulling double-duty in both Arizona and Vermont. He will be joined by two 30-somethings, Shannon Keegan from Oregon and Erica Sheckler from Pennsylvania, and a veteran Paula Yankauskas from Vermont.