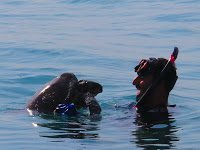 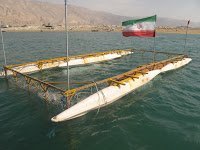 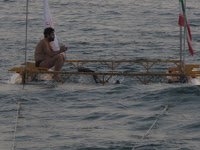 Mohammad Hossein Bibi Kobadi continues on his 23rd straight day in his stage swim along the Persian Gulf.

During his 1000K swim, the Iranian swim coach added a protective cage to his wetsuit, paddles and fins in the 20°C Strait of Hormuz.

After a 25.9K swim the day before, he started his 23rd stage at 11:40 am under sunny skies and generally flat conditions at the Aftab Port near Kish Island and finished 5 hours 30 minutes later at Chiroyeh Port in Hormozgan after knocking off 21.6K en route to his swim to Iran.

He was followed by a flotilla of passenger boats, a safety boat, fishing boats and freight boats as interest continues to build on his swim.

During the stage swim, he stopped for a cumulative total feeding time of 50 minutes to down coffee, dates, soup, local fish and a banana. In addition to encountering plenty of jellyfish, he was also followed by turtles and sea gulls.

His support team attached a protective mesh in the front of the cage to help brush away the blooms of venomous jellyfish.

A towline from the 7-meter-long cage was connected to the tug boat as the structured was pulled along proportional to the speed of swimmer.