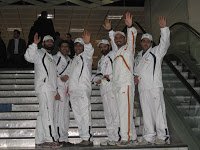 On his second day of his stage swim out in the Persian Gulf, 34-year-old Mohammad Hosein Bibi Kobadi swam for 3 hours and 10 minutes under the guidance of Captain Mahmood with crew members Amir Estaky, Mahdi Giviani, Ali Kobadi and Esmail Eskandari in support.

Kobadi started at 2:45 pm between Hurmoz Island and Qeshm Island and finished 5.1K later at 5:55 pm in the Hurmozgan Province.

With the water temperature at 20°C and the air at 25°C, the winds were generally strong between 12-18 knots, reaching up to 26 knots, he swam further than the first day when he swam 4.2K.