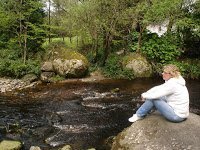 Monique Wildschut from the Netherlands was inducted in 1993 as an Honour Swimmer in the International Marathon Swimming Hall of Fame.

The tall, powerful Wildschut dominated the women’s professional marathon swimming circuit from 1983 to 1988 with six consecutive World Professional Marathon Swimming Association titles. As a solo swimmer, she crossed the English Channel twice: in 8 hours 44 minutes in 1982 and in 8 hours 19 minutes which was the fastest time of 1984.