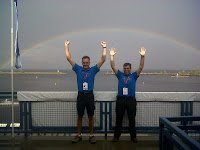 Should be more of the same for the upcoming 5K and 25K races that can be viewed live online on Radio Canada.

Photo above shows a full rainbow illuminating the world championship course, celebrated by Benoit Amyot and Roger Gervais, the two men who are leading the army of volunteers and staff who are hosting the passionately friendly and professionally organized competition.