More This Year Than Last Century 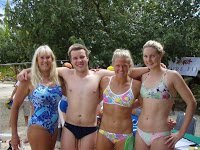 As Anne Cleveland (standing on far left with world 5K champion Melissa Gorman on far right) will explain at the Global Open Water Swimming Conference in Long Beach, California on June 5th, the history of successful women in open water swimming is fascinating and reasons why the sport is currently exploding among the female gender.

Whether it is in channels around the world or local lake swims, women are rapidly and globally encroaching on the traditional male majority in the sport of open water swimming.

Last year, for example, at the Great Swim Series in Great Britain, the total number of women outnumbered the total number of men for the first time ever in one of the world’s greatest and most popular open water races. Colin Hill, race director for the Great Swim Series, will also explain reasons for this growth during his presentation at the Global Open Water Swimming Conference

For the upcoming 2010 English Channel season, nearly 250 individuals will be attempting the channel, nearly 40% women. What makes this number significant is that it is larger (for one single channel season) than the TOTAL number of individuals who successfully crossed the English Channel from 1875 (when it was first crossed) to 1972 – nearly 100 years of channel history.

In the Pacific Ocean, attempts on the Catalina Channel are similarly growing. The Catalina Channel Swimming Federation reports that nearly 40 solo swimmers and several relays are set for channel crossing during the 2010 season – a significant growth from the previous record year of 2008 when 28 swimmers made an attempt.