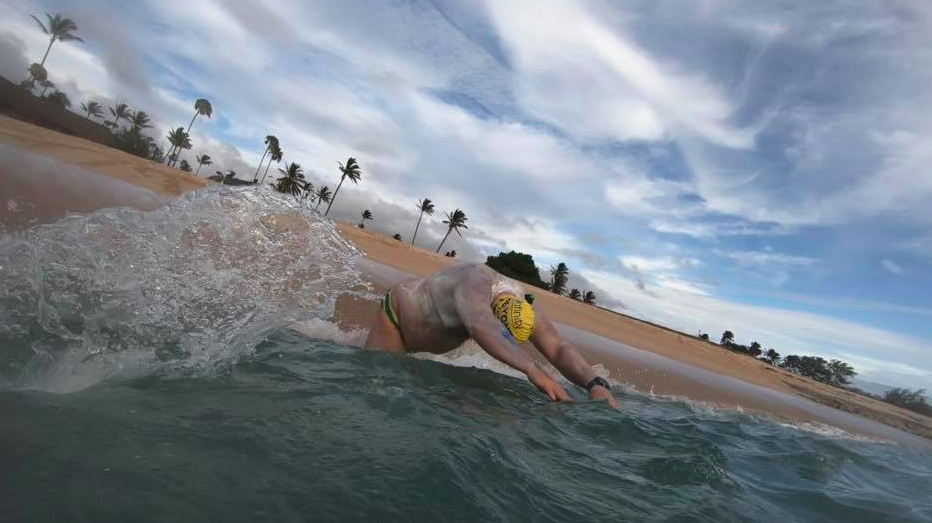 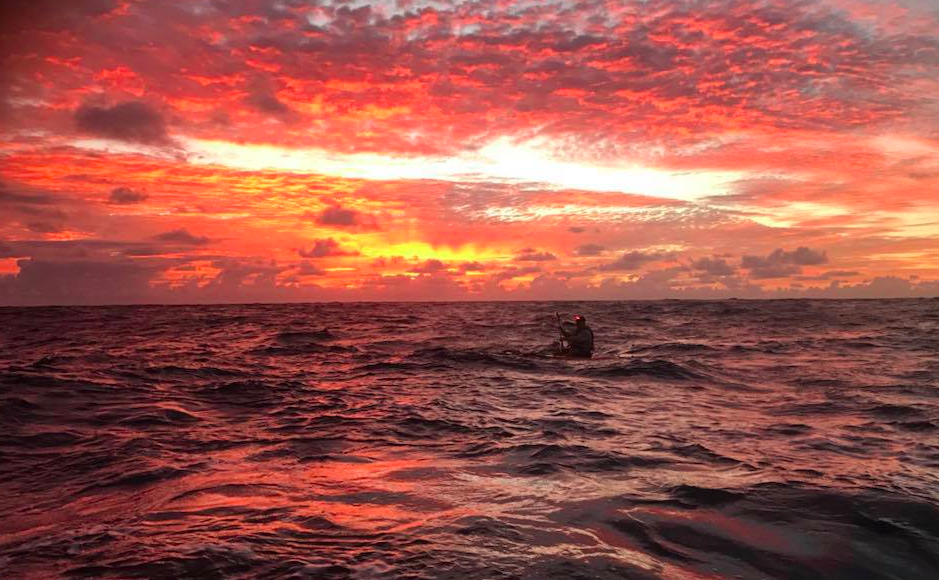 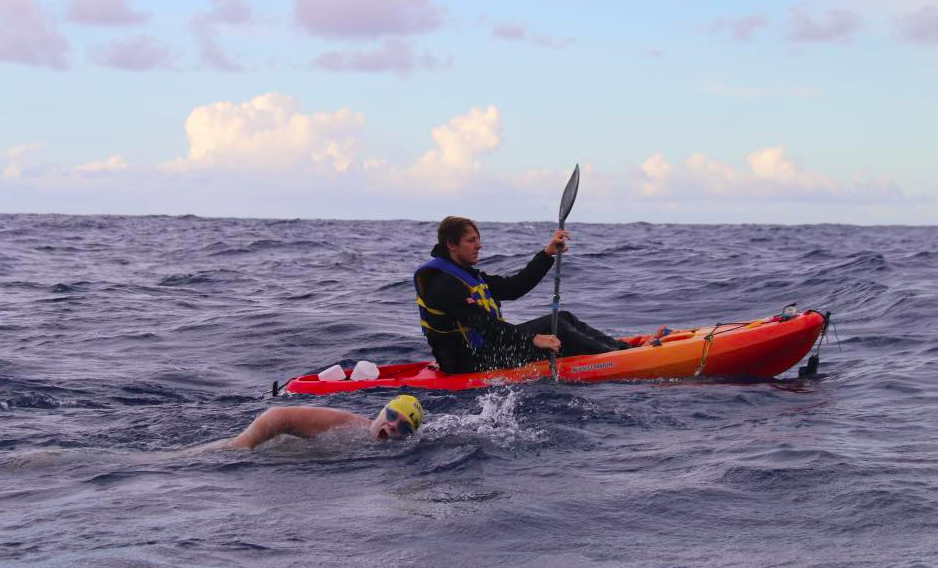 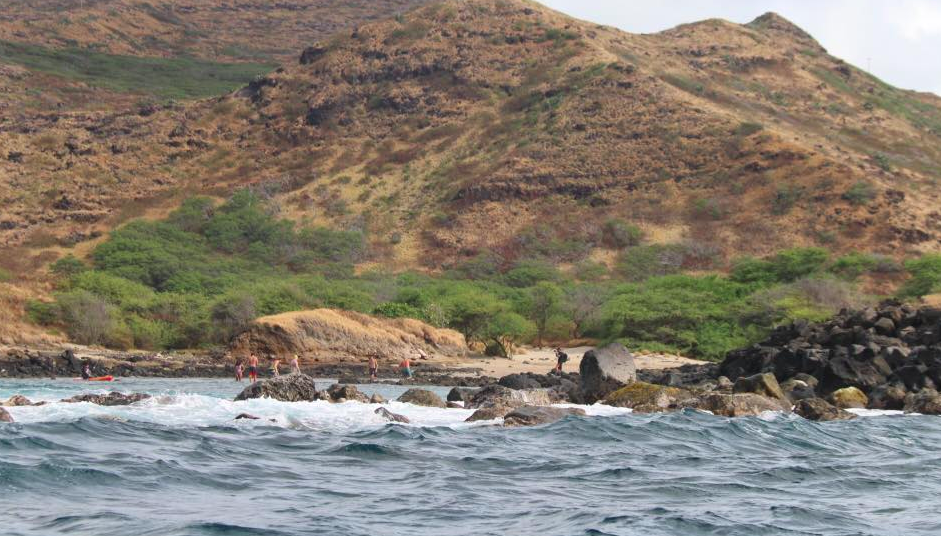 Lynton Mortensen returned home to Brisbane, Australia from Hawaii where he started a crossing of the Molokai Channel between Molokai and Oahu on his birthday June 30th and finished the next morning in 14 hours 49 minutes.

His 5th Oceans Seven channel was practically a do-over. “I all but swam Molokai twice in 10 days. On the first attempt on June 20th, I was 13.5 hours in with less than 5 km to swim, having already swum over 40 km when I was smashed by box jellyfish all over and writhing in agony on the deck while the boat speed back to harbor.”

Mortensen was meet by an ambulance at the shore and was immediately taken to the emergency room at a local hospital where he spent the entire day on a morphine drip.

His encounter with box jellyfish came three weeks after he spent two days in the intensive care ward in another hospital on the Australian Gold Coast when he swam into the most venomous fish in the world – a stonefish – at Snapper Rocks on the Gold Coast just before one of his ocean swims. “I have had a few tough encounters with the most deadly of marine life,” jokingly said the 54-year-old attorney. “I love sharks. It was some taper.”

But there was a silver lining as a result of his first DNF due to the box jellyfish encounter.

“It resulted in a meeting with Dr. Angel Yanagihara, a world-leading expert on all things relating to box jellyfish. I was lucky enough after the swim when she kindly invited me and my family to her research lab at the Hawaiian University and subsequently days later to join her and her research team to collect and capture box jellyfish in the wee hours of the morning along Waikiki Beach.

We were suited up appropriately with 1 mm wetsuits and gloves. We collected 300 box jellyfish from 2:00 am along Waikiki Beach. The 10th day after full moon is breeding time. Dr. Angel is conducting lifesaving research and is in the Philippines at the moment helping authorities put in place treatment and sting protocols. Sadly too many children are losing their lives – a 10-year-old Philippine died recently from a box jellyfish sting. It is extraordinary after listening to Angel just how wrong we get it, including among Australians, in treating box jellyfish stings. I was an example of everything been done wrong in my post-sting treatment, but fortunately came out on the right side. I sish I knew and had meet Angel before the first swim. I fortunately was able to get through a couple of box jellyfish stings on my second swim armed with Angel’s advice and spray and creams
.”

Back in the Molokai Channel, one of Mortensen’s training buddies in Brisbane – Anna Strachan – also almost swam Molokai twice a couple of weeks before me. Mortensen explains her do-over adventure, “On her first attempt, she was ¾ of the way across and swimming strong when her boat propeller caught a float line which wrapped around it. When they untangled it, the propeller seal came out and the boat started taking on water. Tragically for Anna, they had to call the swim and get assistance to bring the boat back to shore. The following week Anna went back and successfully swam Molokai Channel in 15 hours 15 minutes with the crew I had with Michael Twigg-Smith and his team. Anna had a different boat and captain for her first swim.

It is crazy that two Brisbane-training mates were so close on their first Molokai swims only to be denied by circumstances beyond our control
.”

Mortensen walked off Molokai Island at 6:00 pm on his second attempt and walked upon the shore at Alan Davis Beach on Oahu at 8:49 am. He explained his second attempt, “It was a solid birthday swim with plenty of chop, swell and waves sometimes breaking over me during the night swim, with the odd short body surf. An honest bump and grind swim all the way.

Ten days after the box jellyfish love-in, with a little trepidation but comforted by the sting protocol that was put in place by Dr. Angel Yanagihara, I returned to the scene of the crime. So it wouldn’t be a Molokai swim for me without being stung again by box jellyfish. I was hit early in the swim, then 4 km from the finish on the right arm and again 1.5 km from the finish on the left arm. I know that sting anywhere. Angel’s spray and cream took the edge right off – nothing was stopping me second time around.

A big shout out of thanks to CEO Lindsay Lyon, Bree Turner and the crew at Ocean Guardian for sponsoring me and providing two Freedom7 Shark Shields for my swim. I only saw a big fish very deep early in in the second swim happily going the other way. However, it gave comfort knowing the Ocean Guardian Shark Shields were hooked up on the support kayak, especially given some other swimmers past shark encounters.

After two Molokai crossings in 10 days and just 5 km short the first time before being smashed by box jellies, it was a high of emotions to finish so strong after the first ordeal. As champion Brisbanite and tough as nails swimming mate Anna Strachan says, ‘That’s how we roll.’ 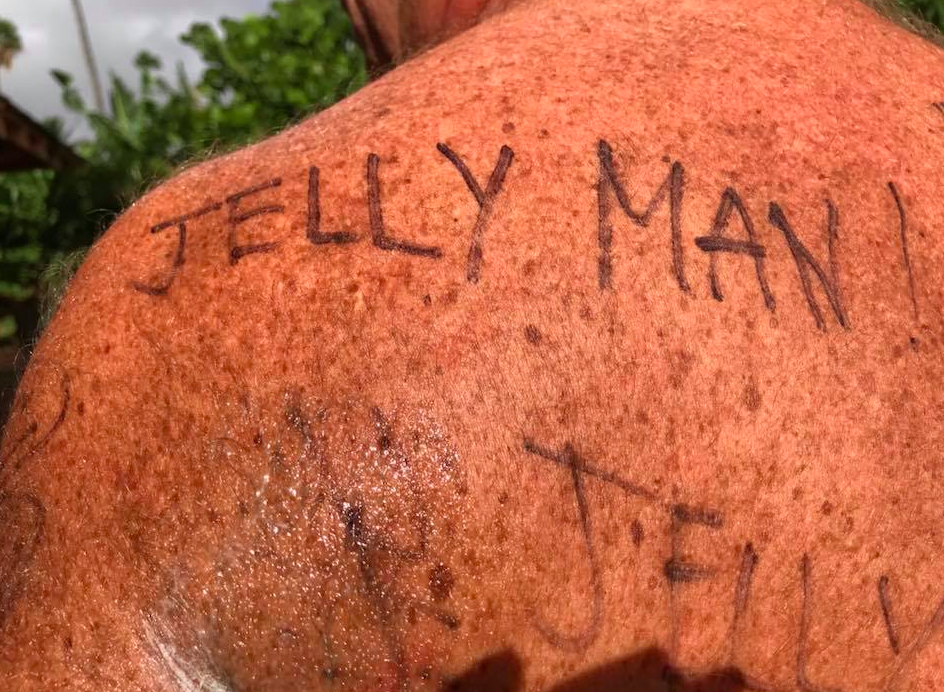