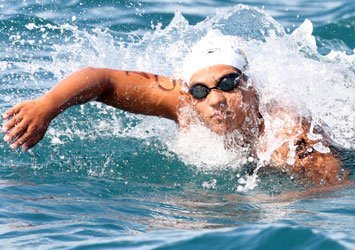 We looked into our crystal ball and made some bold predictions for the 2013 open water swimming calendar year for amateur swimmers, solo swimmers, professional swimmers and relays (see here and below).

Many of the predictions came true:

Prediction #1. There will be tremendously competitive and exciting races at the 2013 FINA World Championships in Barcelona, Spain. The American women will battle the Italian women for the top of the podium in the 5 km and 10 km races.

Reality: The races at the 2013 FINA World Championship were among the best in history, from the incredibly competitive women’s 10 km marathon swim to the 0.4-second victory of Thomas Lurz over Brian Ryckeman.

Prediction #2: Thomas Lurz will earning another world championship title in either the 5 km and 10 km.

Reality: Lurz completed an unprecedented championships with 2 gold medals, a silver and a bronze in the 5 km solo, 5 km team pursuit, 10 km and 25 km races at the 2013 FINA World Championships.

Prediction #3: Ous Mellouli trying to win his first world championship title in an open water race, the USA defending its 5 km team pursuit title, and completely wide open battles in the 25 km marathon swim on the men’s and women’s side.

Reality: Mellouli won his first world 5 km open water swimming title in 2013 and the races in the 25 km marathon swim came down to a sprint on both the men’s and women’s sides (where Lurz won in 0.4 seconds and Martina Grimaldi also won the world title in a close sprint), but the USA was handily defeated by Germany, Greece and Brazil in the 5 km team pursuit.

Prediction #5: Anna Carin Nordin becoming the first woman to complete the Oceans Seven and the first swimmer from Scandinavia to complete a North Channel crossing due to her heavy training in cold water throughout the European winter.

Reality: Anna Carin Nordin became the first woman to achieve the Oceans Seven and the first Scandinavian woman to cross the North Channel.

Prediction #6: Penny Palfrey and Michelle Macy will announce their successful North Channel swims – and celebrate their Oceans Seven achievement – in the early part of the season…very very early.

Reality: We missed the early part of the season, but guessed right about Macy’s success.

Reality: The speed at which the International Ice Swimming Association is growing is certainly qualifies as a phenomena.

Prediction #8: A record number of swimmer completing crossings in the California Channel Islands including Catalina and Anacapa Islands.

Reality: 2013 was the most successful Catalina Channel season in history.

Prediction #9: The total number of open water swimming events around the world to exceed 10,000 competitions worldwide.

Prediction #10: Over 100 unprecedented swims (individual and relay) completed somewhere around the world, including a record-breaking ocean relay becoming successful down the coast of California.

Reality: Unknown if over 100 unprecedented swims were completed, but the Night Train Swimmers set a world record swimming down the coast of California.

Prediction #11: Two 70-year-olds completing a crossing of the English Channel.