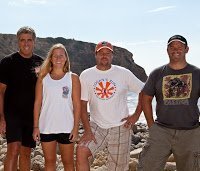 Chris Dahowski of Swim 22, a nominee for the 2010 World Open Water Swimming Performance of the Year, will be organizing open water orienteering swims in California next year.

The open water orienteering is similar to land-based orienteering, but consists of a two-person team: a kayaker or paddle boarder (navigator) and the athlete-in-the-water (swimmer).

The swimmer depends on the navigator and the navigator is limited by the speed of the swimmer in a dual dependency on the water that combines speed, endurance and navigational IQ.

The team competes head-to-head with other teams with the teams split into different divisions.

A series of randomly-positioned numbered buoys is placed on an open body of water. Each team is given a different “map” (a series of instructions with a specific order in which the buoys must be navigated).

The start and finish are onshore where the swimmer must pass through a starting gate while the kayaker can start in the shallow water. Each team navigates through the series of buoys. At each buoy (control point), there is a different shaped punch. As the swimmer and navigator round each buoy, the navigator finds the punch attached to buoy and punches a laminated card that they carry with them. After each buoy is navigated, the team then heads off to the next buoy.

Each course in the series is different, but at each race, the team navigates eight buoys 750 meters part. All eight buoys must be swum to and around (navigated); all eight punches will be marked on the team card and the swimmer must return to the start, clear the water and run past the finish line for an official finish.

The top two times from each division are paired up. The first and second teams compete head on, the third and fourth best teams compete against one another, etc. The first, second and third teams are determined by the total time of their two swims.

Motala is a type of orienteering that is a point-to-point which the competitors do multiple short loops (each with a new map) to create a long course. This format is often used on a small map to create a longer course and is named after the city of Motala, Sweden.

Chris Dahowski is shown in an orange hat above with his Swim 22 teammates.