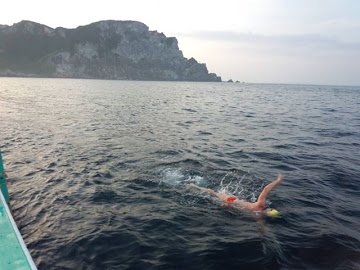 12 hours into his Tsugaru Channel attempt and the winds remain uncharacteristically light and the waves nearly non-existent. Brad McVetta has taken advantage of the conditions, but he still has to push hard against the viciously wicked Tsugaru Current before he reaches the distant shores of Hokkaido.

The challenge continues as the sun starts to set in the northern reaches of Japan during the Tsugaru Channel kick-off swim today.

Photo by Masayuki Moriya of Ocean-navi.

Update 8 km from Hokkaido. The water temperature has shifted between 15ºC (along the coasts) and 20ºC (mid-channel) as McVetta closes in 8 km from shore, but the tides have shifted, the water is getting colder, the sun is setting, and he is now battling slowly against the wall of increasingly moving water.