Motivated By Others, Motivating Others In The Open Water 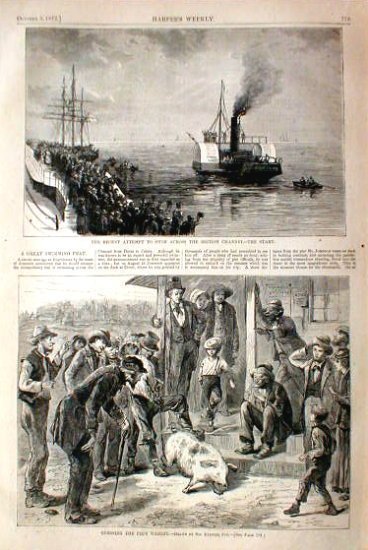 Captain Matthew Webb was deservedly inducted in the first class in the International Marathon Swimming Hall of Fame in 1963. Two years later, he was inducted in the International Swimming Hall of Fame for his myriad exploits in the open water including the first successful crossing of the English Channel in 1875, a feat that was not replicated until 36 years later.

But like many others in the contemporary world of open water swimming, who inspired Captain Webb? While his exploit, rightly described by the famous inscription of ‘Nothing Great Is Easy’, has directly or indirectly every channel swimmer after 1875, what was the drive behind Captain Webb? Was it something he independently dreamed up or was there a driving force behind his goal while he was working on the high seas?

In 1873 Captain Webb was serving as captain of the steamship Emerald when he read an account of the failed attempt by J. B. Johnson to swim the English Channel. He became inspired to try himself, and left his job to begin training.

Those early pioneers, the men and their crews, who first dreamed of swimming across the water to get to the other side, were clearly dreamers who pushed their bodies to match their visions. Their thoughts centered around, “…I am going to swim from here to there…”

As far as their eye could see is what they planned to swim, a legendary goal that set in motion their early attempts to cross the English Channel.

So just as Captain Webb has inspired those who came after him, he was undoubtedly motivated by those Channel aspirants who came before him as the generations of marathon swimmers continue to the foreseeable future.