Mr. Outside Beats Mr. Inside At The Distance Swim Challenge 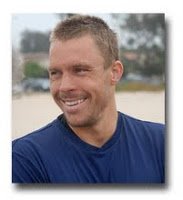 Mark Warkentin, an American Olympian, stayed true to the straight-line tangent between the 3-meter blueseventy buoys at the 12.6-mile Distance Swim Challenge while Ky Hurst, the Australian Olympian, took advantage of his surf skills and took the inside track – inside the breakers.

The strategies were distinctively different. While Mark was swimming straight on the outside of the course, Ky was weaving in and out of the buoys along the Southern California coast, seemingly a brillant strategy.

Ky went inside to take advantage of the fast-moving water in the 2-3 foot surf and even dolphined along the shallows in the course. Normally, a very smart move, but Mark was in great physical shape and was moving too fast along the straight-line course, especially benefiting from a strong northerly current that was pushing everyone along the course.

By the fourth transition area where the athletes were required to come in 200 meters into shore, run up through the check-in and then move back out to the waves – Mark was in front by 50 meters. “When I saw Ky behind me, I saw him slow down a bit, maybe waiting for his teammate [world 25K champion] Brendan [Capell] so they could work together, I just put my head down and took off. I did not look behind me, I just went hard. Hard for a very long time.”

All the way to the finish where he comfortably won the inaugural Distance Swimming Challenge. Official results to be published tomorrow.