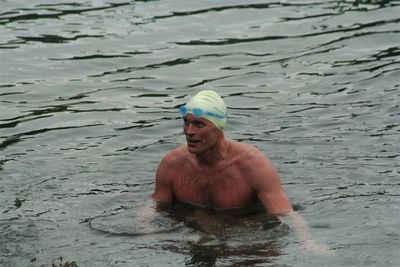 Ned Denison is renowned for juggling several things on his plate as he continues to swim around the world. Organizing the Cork Distance Week, working in the IT industry, training, ice swimming, marathon swimming, prison island swimming, Triple Crowning, networking, and introducing many to the wonders of the open water world.

So it is not unusual for Denison to pack several things together when he next flies from his adopted Ireland to Southern California.

Ned Denison has booked his flights to Los Angeles for the International Marathon Swimming Hall of Fame Induction Dinner that will be held on November 4th. He will greet and host open water swimmers from around the world and give honor to the members of the IMSHOF Class of 2016: Tomi Stefanovski of Macedonia, Chloë McCardel of Australia, Mányoki Attila of Hungary, and Charlie Gravett of the UK.

But Denison is not the type to fly 6,000 miles just to meet swimmers and host a dinner to honor his peers.

Before the dinner, he’ll sneak in training swims and a circumnavigation around Anacapa Island with two others on a tri-tandem swim: Denison, Elizabeth Fry, and Michelle Macy. The 23.5-mile circumnavigation course has been completed just once before – by Peter Hayden in 2014 in 5 hours 41 minutes as part of his Anacapa Around-and-Back swim [see below].