The Music Of An Extreme Open Water Swimmer 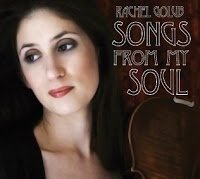 Rachel Golub, an extreme open water swimmer with the Coney Island Brighton Beach Open Water Swimmers and a world record holder for the two-way crossing of the Beagle Channel between Argentina to Chile together with Patricia Sener and Cristian Vergara, is a talented multi-instrumentalist, vocalist and composer.

She not only is the Concertmaster for Fiddler on the Roof and released her first solo violin album, ‘Songs from my Soul’, she also will perform a recital to complement the record at the Brooklyn Heights Cinema on April 4th.

“I’ll be joined by my fabulous colleagues, pianist Steve Beck and cellist Yoed Nir, for a program of Jewish pieces of the early 20th century, as well as short pieces by Ravel, Stravinsky, Ljova (Lev Zhurbin), and a piano trio by the ultimate Jewish composer – Mendelssohn. The Cinema is owned by Kenn Lowy, a long-time marathon swimmer and a musician himself.

The water is in the high 40s here; the wind has made for some gorgeous swimming. I haven’t had much time to hit the beach, but when I have, I’ve been able to swim some nice early-spring miles in heavy chop with the sun on my back. Nothing better!”