My Finest Hour Has Come 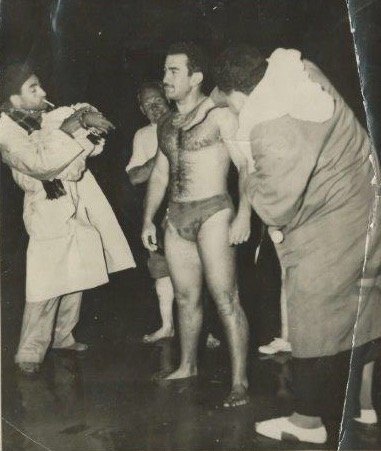 After seeing a newspaper advertisement in his native Egypt, Omar Sabry signed up to compete for a spot in a 6-person relay across the English Channel.

The Egyptian Swimming Federation was scouting for volunteers and went to the public to scout for its best swimmers.

The Federation had not expected to find a water polo player with the drive of Sabry.

“Having signed up, I was immediately put through a grueling training program in Cairo, including a taxing 10 km swim around Zamalek Island,” Sabry recalls. “On round one, I came out third with a [time of] 2 hours and 45 minutes.

On round two, which entailed circling the island twice, I came out second and just under 7 hours. Because I was among the top three I was admitted hands down much to the surprise of the organizers
.”

The water polo player headed off to Dover with his teammates and ended up completing their English Channel crossing from England to France in a fast 11 hours 11 minute on September 7th 1949, breaking the existing record of 12 hours 35 minutes set in 1935 by a French team. The members included Marie Hassan Hamad, Mohmod Mahamed Hassan, Sabry, Ahmad El Zerkani, Aley Addine, and Hassan Abdel Rehim. The first five swimmers each swam 2 hours on their individual legs, and then the anchor swam for a little over an hour.

“My finest hour had finally come,” Sabry later reported. “We all feel fine, and it was a lovely crossing back to England in the early morning. The swim finished on a top note, for Hassan Abdel Rehim, the last name, set up such a cracking pace, with beautiful, rhythmic swimming, that he left the accompanying rowing boat behind.”

Photo shows Sabry getting prepared for the English Channel crossing and getting greased up on the shores of Dover as the press correspondent Abdelmoneim Al-Sawy confirms the time.