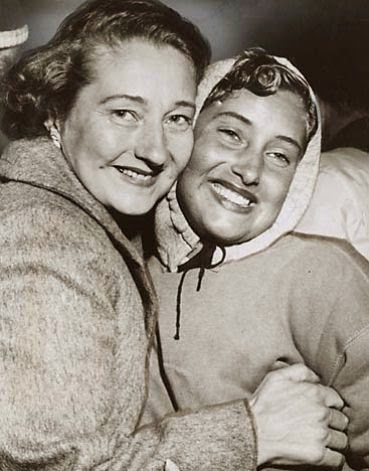 In yesterday’s Daily News of Open Water Swimming, it was reported (here) that Myra Elizabeth Thompson was the first person to attempt the 30-mile swim from the Farallon Islands to San Francisco.

But this report was incorrect and incomplete information.

During her pioneering swim, the 22-year-old did indeed come tantalizingly close to her goal, but she was pulled from the water after 18 hours within 2 miles of the California mainland in 1957.

However, this was her second attempt.

On September 25th 1956, Thompson had attempted a similar crossing together with 7 other competitors.

Thompson battled an unrelenting current for 9 hours 21 minutes to prevail over an original field of 2 women and 6 men.

According to an article with the headline “Who’s Tired? Not Me” in The Times on September 26th, Thompson’s renowned coach and pilot Ray Taft of San Mateo, California said the San Francisco State college student could have gone further in the wavy, choppy waters. Taft said, “Considering the elements, there was no possibility in going any farther. What good would it have done if we went five or six miles more. It wouldn’t have given her any more money.”

Thompson later attempted to cross the Strait of Juan de Fuca and completed the 1959 Billy Butlin Cross Channel International Swim across the English Channel in 15 hours 35 minutes, only 10 minutes behind Greta Andersen.

Photo by Joe Rosenthal above shows Myra Thompson on right with her mother, Elizabeth Thompson on left.