Myths In The Open Water: Heat Escape From Head vs. Body 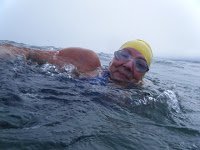